MoD and digital media: “We haven’t gripped it, but we’re getting there”

"I could not write about the past week without mentioning the tragic death of Rifleman Adrian Sheldon. Shelly was a much loved member of the Fire Support Platoon here at FOB [Forward Operating Base] Inkerman and his loss has been extremely hard to come to terms with."

In among the stories about political meltdown you may not have noticed a steady string of British military casualties in Afghanistan. Rfn Sheldon was one of 12 fatalities in May – the worst month in this respect for British forces since June last year. In the run up to the elections in Afghanistan coalition faces are expected to confront an insurgency determined to disrupt the democratic process. 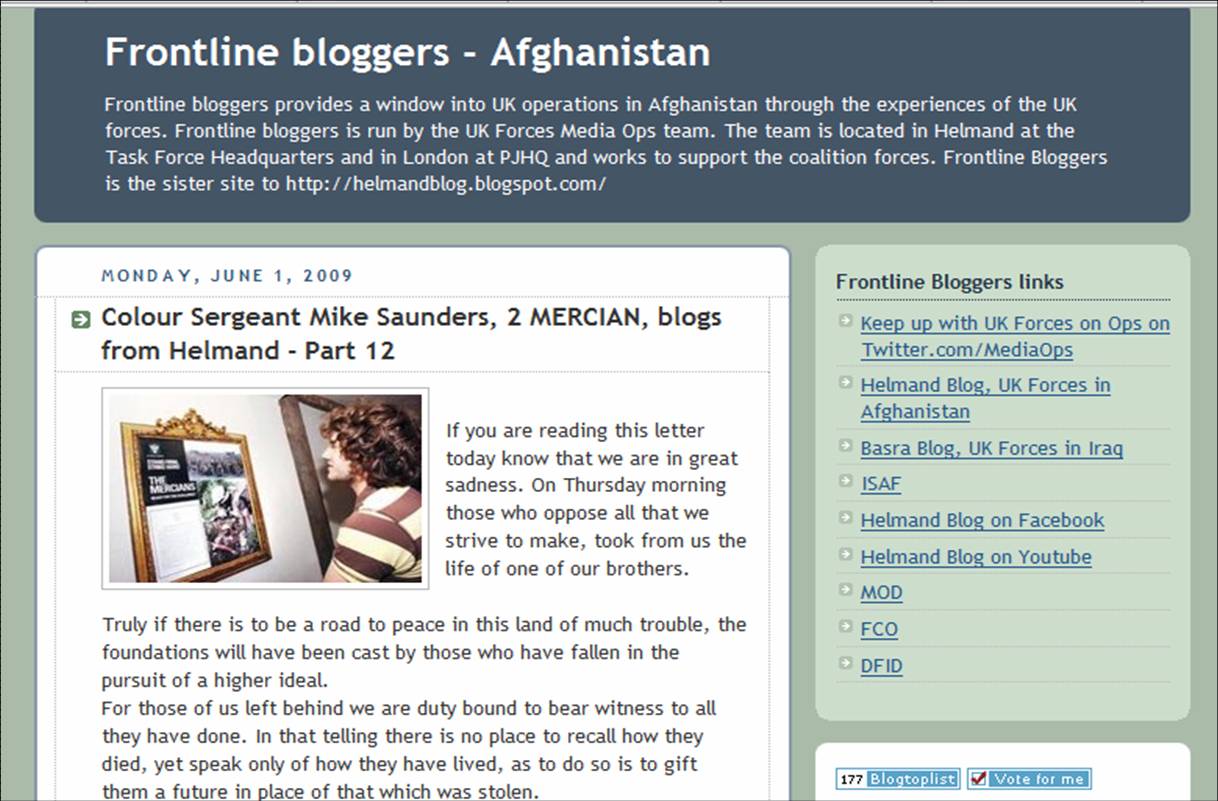 The stories of soldiers in Afghanistan might have been slightly lost in the mainstream media agenda recently. But the development of the Frontline Bloggers blog means British soldiers have a new outlet for their experiences, from the tragic as expressed above by 2Lt Tom Parry to the more mundane.

The blog, which is the run by the Ministry of Defence offers "a window into UK ops in Afghanistan through the eyes of British soldiers", and began in April as an offshoot of the Helmand Blog with a post by Lt Col Simon Banton.

Since then the blog has grown. A notable addition was that of Colour Sergeant Michael Saunders who made national news last month as a consequence of his dispatches from Afghanistan. Initially Col Sgt Saunders sent emails to his sister in Worcester. She displayed them in a local pub and then allowed the man behind Frontline Bloggers to incorporate them on the site.

That man was Major Paul Smyth. Unlike many others who work in Media Operations, Smyth is a Territorial Army soldier who runs his own PR firm. This background helped him recognise the value of Internet tools – they "convey what you are doing incredibly quickly" and are relatively simple to use once "you’ve got a basic toolkit".

For Smyth, engaging with social media tools is valuable for several reasons. A blog enables him to collect the material being produced by serving soldiers. He feels their posts offer "a different flavour" of what is happening on the ground and provide an outlet for stories that wouldn’t always make the national news.

"More importantly", he says, "it adds to and complements the overall communications strategy by developing the breadth of content and delivering it via more non-traditional means to new audiences."

All the posts on Frontline Bloggers are administered through command in theatre and the Permanent Joint Headquarters in Northwood, London. Posts are checked to make sure they comply with operational security, but Smyth says most bloggers are usually aware of what not to say.

Major Smyth has also been busy launching a MediaOps Twitter feed over the last month.

He admits that the organisation still hasn’t "gripped" everything. Soldiers still have difficulties getting material back from Forward Operating Bases in Afghanistan and technological change means it’s a struggle to keep pace with the communications industry.

But it’s clear that the Ministry of Defence has increased its social media offering since my first post for this blog, just over a year ago. Major Paul Smyth hopes it’s the start of something much larger.