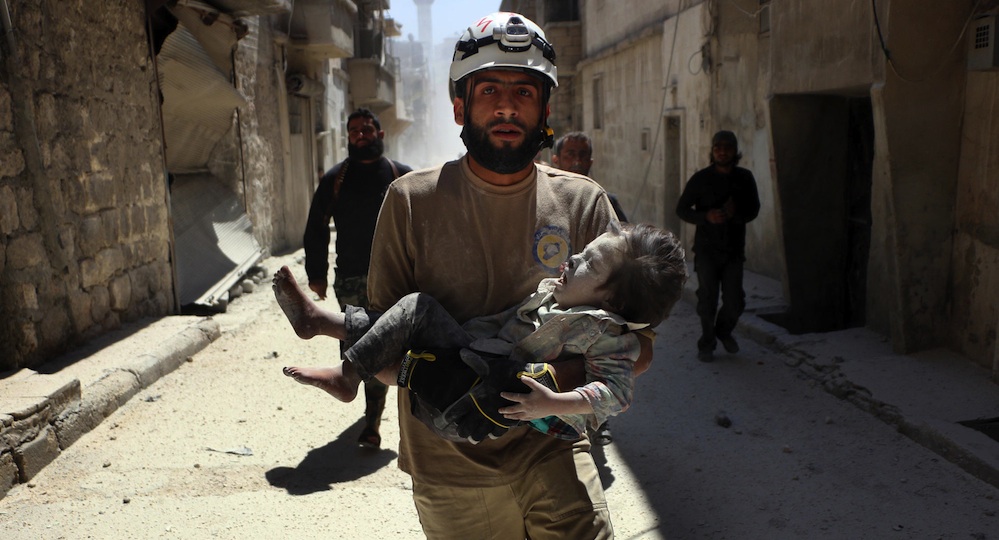 The Girl from Aleppo: Responding to Syria’s Humanitarian Crisis

Despite attempted talks and faltering ceasefires, the conflict in Syria continues to devastate the lives of its population. The number of people living under siege in the country has doubled this year to almost one million, and government airstrikes in Aleppo carry on at grave humanitarian cost. As bombings continue to target hospitals, a quarter million civilians are currently suffering in Aleppo without hospital care.

Acclaimed British foreign correspondent and author Christina Lamb now tells the timely and inspiring story of a remarkable young hero: sixteen year-old Nujeen Mustafa. Born with cerebral palsy, Nujeen undertook a harrowing journey from war-ravaged Aleppo to Germany in all in a wheelchair. She tells the details of her experience for the first time in a memoir, Nujeen, co-authored with Christina Lamb.

In the context of Nujeen’s unimaginable journey, we will look at the course of the Syrian Civil War, the impact of bringing individual stories to the public, and action Western countries could take to bring urgent relief to the besieged population of Aleppo.

Chaired by Azadeh Moaveni (@AzadehMoaveni), former Middle East correspondent for Time magazine. She reported from throughout the region for much of the past decade, and speaks Persian and Arabic. Her books include Lipstick Jihad, Honeymoon in Tehran, and she is co-author, with Shirin Ebadi, of Iran Awakening.

Christina Lamb (@christinalamb) is the roving foreign affairs correspondent for The Sunday Times. She has been a foreign correspondent for more than twenty five years, living in Pakistan, Brazil and South Africa first for the Financial Times then The Sunday Times. She is the author of The Africa House, House of Stone: The True Story of a Family Divided in War-torn Zimbabwe, Waiting For Allah: Pakistan’s Struggle for Democracy, The Sewing Circles of Herat, My Afghan Years and co-author of I Am Malala. Her newest book Nujeen: One Girl’s Incredible Journey From War-Torn Syria in a Wheelchair is published by Harper Collins.

Rt Hon. Andrew Mitchell is the MP for Sutton Coldfield and Secretary of State for International Development.

Mina Al-Oraibi (@AlOraibi) is an Iraqi-British journalist and political analyst, a senior fellow at the Institute of State Effectiveness and a Yale World Fellow. She is a member of the Global Agenda Council on the Middle East and has written extensively on US and European policies in the Middle East, in addition to conducting several high profile interviews including with US President Barack Obama and Iraqi Prime Minister Haider Al-Abadi.