If You Bend Over Far Enough… 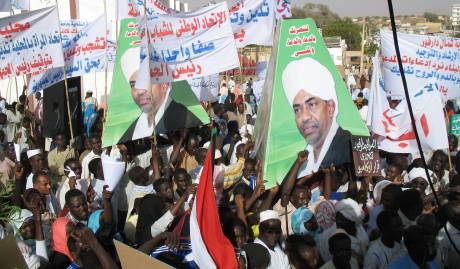 The fallout from Sudan’s decision to expel 13 international charities and shut down four local ones continues. Millions of people will be without water, food and medicine unless or until the agencies who remain in Darfur can step in. That is a big negative when the only entry in the plus column is an arrest warrant with no possible means of enforcement.

Those with a humanitarian outlook have been fast to say this was inevitable. That criminalising a government was always going to provoke a reaction against aid agencies, which have had to put up with difficult circumstances for years. At the same time, the human rights and Darfur advocacy movements have celebrated the indictment and used the expulsions to point out once again President Bashir’s brutality.

And once again the two positions have polarised to the extent that justice and peace are seen as mutually exclusive. Which they are, when the two sides are so far apart.

In the past I’ve been deeply critical of the Save Darfur movement and its supporters. They see Darfur as a black and white case of good and evil, and have led the debate towards the wrong solutions as a result. Seeking to indict President Bashir is one such example. There was always going to be a very good chance that it would make matters on the ground worse.

But hang on a minute. The aid agencies have also been part of the problem. They have been routinely screwed by Khartoum without so much as batting an eyelid. Staff are kicked out, spied on and prevented from travelling to Darfur. They have been smeared in the press and Jewish members of staff accused of being Mossad agents with barely a protest made. The argument has always been that it’s better to deliver aid than make a fuss and risk losing access.

Getting kicked out is indeed a disaster. UN officials reckon as much as a third of some aid agencies’ budgets are raised from donations related to Darfur. The crisis is supporting countless jobs in headquarters around the world and many operations in other less glamorous hot spots. Darfur is their cash cow.

Of course there is always a tension between delivering emergency aid and advocacy. Standing up and saying what’s wrong can jeopardise your ability to help on the ground. But the charities in Darfur chose total silence in the face of non-stop harassment and intimidation.

It was that silence that gave the Save Dafur and rights lobby – based far from Sudan itself and with a naive outlook – the stage, and allowed the ICC to become the only solution in town. It also emboldened Khartoum, allowing them to think they could act with impunity, knowing that aid agencies would accept every new regulation, expulsion of country director or smear without fighting. And guess what? They kicked ’em out anyway.

While charities might rightly be saying "I told you so" now, they are also partly to blame for their own expulsion and the unfolding mess.