If Truth Be Told: a rebuttal to The Spectator

Jon Swain, veteran journalist, author and Frontline Club member, told me an astounding story last week. As a young reporter in Paris in the 1960s, he had a girlfriend named Sylvia Raphael who was a brilliant and glamorous photojournalist. Only later did he learn that she was a Mossad assassin in the hit team that gunned down an innocent Moroccan waiter in Lillehammer, Norway. Swain is taking part in a documentary about her, which is why he happened to mention it to me.

Another Frontline member, Edward Giradet, went to Afghanistan in September 2001 to interview the political and military leader Ahmed Shah Masud. He had to leave before the interview for his wife’s birthday. Among the reporters waiting there were two Al-Qaeda terrorists posing as a film crew. They detonated a bomb in their camera, killing Masud, themselves and everyone nearby – the prelude to 9/11. Swain’s and Girardet’s experiences are not unusual among members of the Frontline.

Spies and terrorists use the media. ISIS are experts at social media. The British government’s obsession with “narratives” costs the British taxpayer a small fortune. There are five times as many PR functionaries as journalists in this country, and PR pays a lot better. The same is true in the US, where journalism is becoming a profession on life support. The Russians operate “Troll Houses” to pump out disinformation online, making absurd defamatory statements and repeating them often. These messages are wacky enough to attract attention. Russia deals with troublesome journalists the old fashioned way: it kills them. Turkey puts them in prison. Saudi Arabia simply doesn’t allow them to write.

This is terrible news for our knowledge of the world and for our liberty. Propaganda, or news manipulation, is directed at deceiving the public. Journalism’s role as a corrective is diminishing. Broadcasters and publications are cash-strapped, desperate and fearful, as online and social media eat into their trade and audience. Investigative journalism takes a backseat to infomercials and the meaningless cavortings of movie stars, models, TV game show hosts and others deemed celebrities.

Too many publications, desperate to keep an audience in a shrinking market, cut moral corners. They let their journalists accept freebies. They give people what they think they want to hear. They recruit staff who promote agendas and seek facts only to support their bias. Opinion replaces investigation. Often, they just make it up.

An article by James Kirchick last week about the Frontline Club in the Spectator’s “Life” advertising supplement, “Life in the Frontline,” provides one chippy example worthy of a Russian Troll house: source-free, facts mostly wrong, truth absent or bent and prejudices blatant. The author’s premise was that the Frontline Club, which I opened twelve years ago, had “become a den of swagger and lefty self-regard.” The author attacked me, because I am one of the few people in the British media who still supports Julian Assange. Kerchick and his editor, Toby Young, don’t want anyone to stand up for Assange.

Frontline Club members approached by Kirchick were appalled by his obvious intention to produce a politically-motivated hit job. They showed me their email exchanges, which you may read here. Kirchick applied for the commission by writing to Young that he had “long wanted to write a take-down of that place.” However, he had rarely visited the club and then not for more than ten years. His goal was to embarrass the Frontline because “it’s always been a nest of the worst kind of British foreign correspondents…types who go native and hate the UK/US/Israel.” Young deemed this sufficiently profound to reply that it “sounds like a good piece.”

Kirchick contacted Sam Kiley, Sky News foreign affairs editor and Frontline Club member, in search of a damning quote. Sam replied, “There is no Frontline club position on Assange. Vaughan’s opinions are his own… They have a foreign and often human rights bias, but I don’t think it is left or right wing.” This wasn’t enough to dissuade an obviously envious Kirchick from jizzing his sanctimonious cyanide. 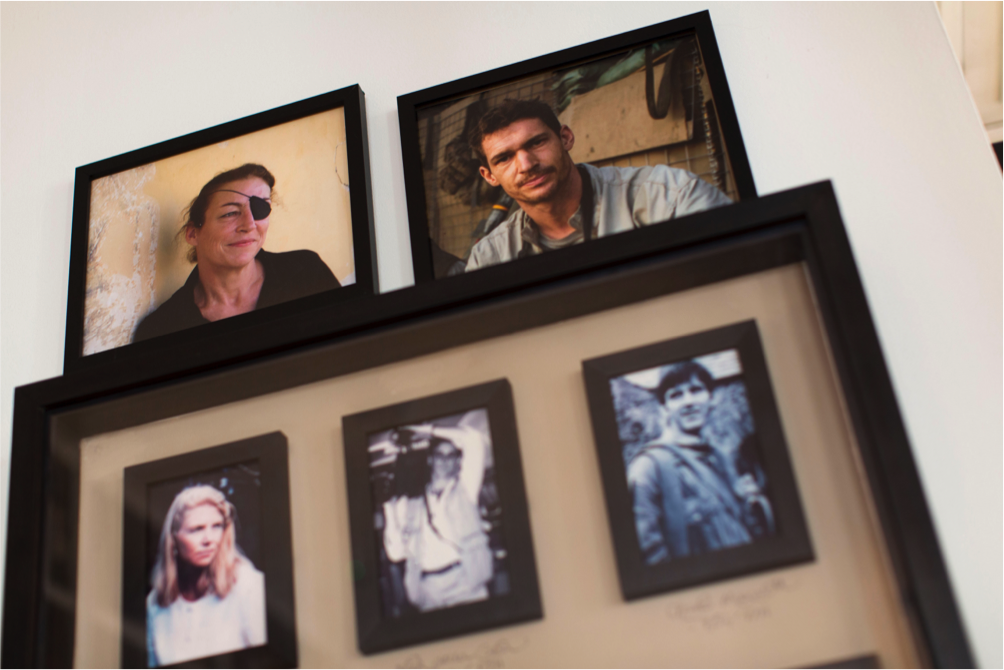 The Frontline Club is dedicated to eight freelance cameramen and women killed in the course of their work, mostly in the 1990s, from my old agency, Frontline News TV. I launched the club with my wife, Pranvera, whom I met while working as a freelance cameraman in her country, Kosovo. I did so because I felt angry and betrayed by the news industry. While the journalists that we worked with were supportive, many editors were shits who denied us credit and reasonable pay. Some colleagues claimed our work as their own. The Frontline Club ensured that my friends would not be forgotten. I wanted their faces in front of mainstream journalists and editors every day. They are now – on the wall by the bar in the clubroom, where they deserve to be, alongside other great journalists like Marie Colvin of the Sunday Times, who tragically lost her life in Syria in February 2012.

Kirchick criticises me for failing freelancers, advising me that I would do “more of a service to freelancers if” I hosted “serious discussion about the ethical traps of conflict reporting,” which he feels includes “the temptation to make stuff up.” His article ignored Frontline Club funding of the Frontline Freelance Register (FFR), which I launched with young freelancers who for very little pay take the risks needed to cover today’s conflicts. These are risks that the mainstream industry mostly shies away from, because the dangers involved are too great to be compatible with the legal responsibility that news organisations have for staff reporters. He also neglected to mention that we are launching an association to represent local conflict freelancers worldwide. It’s these two groups of freelancers that are now delivering British audiences 90% of their conflict news.

The Frontline Club hosts 200 public events a year, many in support of freelancers. My wife and I have no editorial control, deliberately. The aim is to discuss the world and to promote diverse opinions. My views on Assange are tolerated by other members, but most disagree with me. Julian did stay at the club, but he paid his way and received no special favours. Journalists liked the access it gave them for interviews with him. He was more popular with the British press then, because he had stories that they wanted from Chelsea Manning. I will continue to support Julian Assange publicly, because it’s right to do so. I believe that Julian has been treated unfairly under the law, and a society is judged by how it treats people that it doesn’t like. No one criticises a barrister for representing an unpopular client, yet you can get royally smeared for standing up for someone unpopular in the press.

Last week, Kholoud Waleed, winner of the Anna Politkovskayua award, stayed at the club. She is one of the bravest journalists reporting today on Syria and edits an underground newspaper there. She was in London to speak about the exploitation of women, but the Turkish authorities wouldn’t let her back into Turkey where she was living. We, along with other charities, looked after her while things were sorted out. That’s what we do.

Kirchick thinks we sit around on sandbags, telling stories of derring-do. I imagine that insecure people who haven’t done much can feel intimidated by those that have had the initiative and courage to get out there. Journalism’s underachievers might feel comforted by Kirchick’s view that we are all war bores surrounded by dim admirers. It may be true that an unbelievable amount of sex goes on in the club’s bedrooms, but he is wrong about the war stories. I have hardly heard any and don’t like to. First, nobody wants to be embarrassed by someone on the next door table with a better story. Also, people who have really seen war don’t talk about it. Those who have experienced it seek each other’s company, because it comforts them. Dwelling on it is for wannabes and never-will-bes.

We launched the Frontline Club as a club for war correspondents and recruited their friends: aid workers, soldiers, diplomats, artists and non-conflict journalists. I have tried to promote the club more as a place for independent journalism than war journalism for a decade now. I think the Frontline name can still intimidate some people from joining and that’s unfortunate. I hope that they will take a second look.

We are not perfect, but Frontline Club puts mission before profit. Kirchick and Young tried to mug me and they have knowingly originated a pack of lies about the Frontline Club. More importantly, this self-indulgent premeditated slander makes mugs out of Spectator readers who expect to find truth and fairness in an article they paid for.

Perhaps Kirchick should take time off to study journalistic ethics, or leave the trade altogether. And Toby, he just needs a hug.

Any payment that I receive for this will go to the Frontline Club Charitable Trust.