I can’t talk about these things…

Dutch video journalist Ruud Elmendorp spent almost a week in Mogadishu, the embattled Capital of Somalia, at the end May. The insurgents led by the Al Shabab and Al Hizbul movements are trying to topple the internationally recognized government of president Sheik Sharif Ahmed. In this guest post for the Frontline Club, Ruud reports from the urban war zone.

We’re in Villa Somalia in the centre of Mogadishu for a meeting with Somali president Sheik Sharif Ahmed. This is the State House of Somalia, and it’s a pleasant white multi-storey villa on a separate compound in central Mogadishu. The trees here are blossoming pink, and the soft breeze waves through the leaves. But this compound and the adjacent blocks are heavily guarded by AMISOM soldiers. They are here with heavy armored vehicles, and on every corner there are soldiers seated with big guns. These are the days of mortar attacks, and Islamists insurgents, named Al Shabab (‘the youth’) who seem to be advancing. 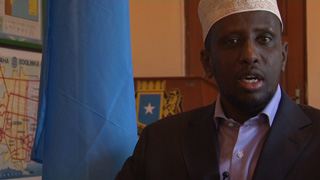 In one of the room we meet with president Sheik Sharif Ahmed (pictued above) who now is something of a trophy for the insurgents.

"I feel absolutely safe here," says the president with a smile. He is speaking to us the press. We have just been checked thoroughly at the gate, where we also had to leave our helmets and flak jackets. The president is urging the international community to pay more attention to his country.

"We have an influx of foreign fighters who support the insurgents. Who knows what happens when they manage to take over," President Sheik Sharif is referring to a Taliban style society the world first saw in Afghanistan.

While we are in Villa Somalia we can hear some mortar fire. We are well aware that a car bomb can explode any moment, killing either AMISOM peace keepers, civilians or journalists. So far they have not hit the villa of the president, which is in fact the only territory he reigns at the moment. Nothing more than one acre in the whole of Southern Somalia. Most of the rest of Mogadishu is under the loose control of the Al Shabab. A president with no country calling for support. It’s almost like the beginning of a fairy tale. 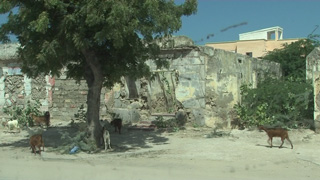 The last few days we have been traveling through Mogadishu in armoured vehicles. The windows are made of seven centimeters of thick glass, and the metal hull is the same gauge. We wear flak jackets and helmets, especially when filming from the hatch in the roof. Meanwhile we are protected by soldiers holding .50 machine guns. Mogadishu passes us by, and looks like one big open air museum of destruction.

Along the main road from the Parliament to the busy Kilometer Four junction not a single building has windows. Everything made of wood has been removed. Few people walk the streets here anymore. Only herds of goats can be seen eating the grass which grows on the sidewalks almost like they are the next generation of city dwellers.

Hundreds of people were killed in the battle over the last few weeks, and some 70,000 fled Mogadishu, which was already almost deserted. As a journalist the thing to do is to report on these terrible things happening, and I did. Still that doesn’t cover the whole story. 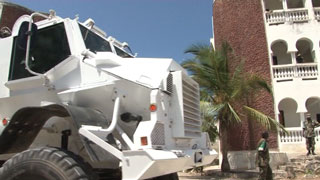 On the same destroyed road in the city centre I just saw a romantic couple walking hand in hand, carefully avoiding the pot holes in the road. The flowering trees are still blossoming for them, and the boys armed with AK47s don’t disturb the young lovers. And that brings an interesting dilemma about what to report. Several miles away lively city life continues. With markets, packed mini buses, and people sitting on the streets drinking their tea, and some of them chewing the local drug of choise, qat. Like there is no war at all.

At the same time, in our armoured vehicle, we pass one of these city markets. I’m standing outside the hatch, trying to capture some of the images you can see on this blog post. Reporting daily life with a flak jacket doesn’t really work, and I wish we could go outside, but the commander of the vehicle refuses,

"If we have one dead white man here, the insurgents will see that as a victory." Several jounalists have been killed and/or kidnapped in Mogadishu. The majority are local journalists. In recent days a famous reporter from the Mogadishu station Radio Shabelle was killed at Bakara Market. For them there are no armoured vehicles, maybe flak jackets, but they don’t really protect you. If a gun is pointed at you, there is nothing that can save you. 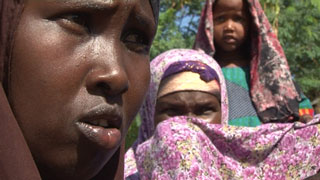 Another ‘technical’ passes us by, no doubt the main contribution Somalia has made to world culture. These 4×4 pickups, with an anti aircraft gun mounted in the back, are manned by ten to twelve heavily armed boys. You usually see them roaming the streets, or at one of the many road blocks. One of the boys is wearing a red and white scarf, the sign of Al Shabab. Estimates say there are between 400 and 1,000 of these insurgents, terrorizing the whole country. They use sophisticated methods for that. Not only machine guns and car bombs, but most commonly by using sophisticated modern technology.

In Mogadishu I heard that Al Shabab have "call centres" from where they send "hate SMS messages" to the local population, threatening them with death if they resist. They also make phone calls, and rumour has it that there are video films circulating between mobile phones using Bluetooth. One of the films, it is said, shows a beheading performed by insurgents. It goes some way to explain why it is so very difficult to get an opinion from the population on what is taking place in Mogadishu.

We visit an health post outside the city centre. People are lining up to register. It’s not clear whether they are really sick, or if they are just looking for shelter. One young lady in a brown scarf is quite explicit, "I am a woman. I cannot talk about these things. That will give me problems." 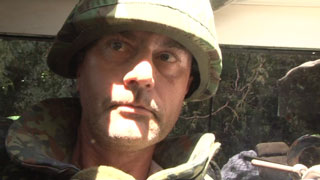 Indeed, under extremists women are not allowed to talk about politics. The armoured vehicle drives us to a safe place for the evening. Over the next few days and weeks I’ll be working on the footage I compiled in the Somali capital, if you’re interested in learning more please drop me a line. Greetings from Mogadishu. That’s me pictured above.