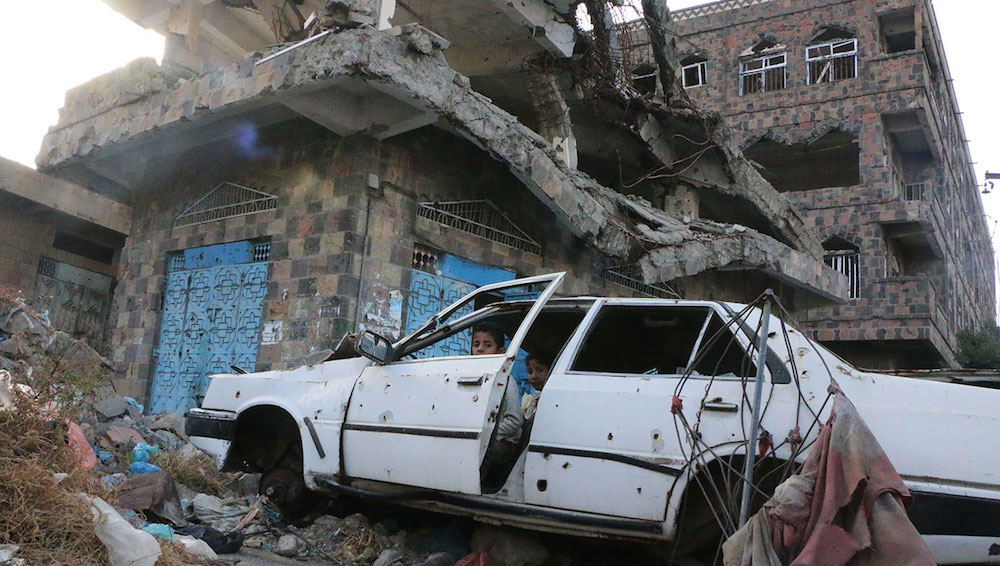 “War is back in cities … civilians are in the middle of it all once again.” – Anthony Beevor

A new ICRC, report called ‘I Saw My City Die’ found that between 2010 and 2015, nearly half of all civilian war deaths worldwide occurred in Syria, Iraq and Yemen. The majority of these deaths have taken place in cities: Mosul, Aleppo and Taiz. Join our panel to discuss the emerging trend of War in Cities, with comparative studies of different cities and nations, over recent years.

“Over the past three years, our research shows that wars in cities accounted for a shocking 70% of all civilian deaths in Iraq and Syria”, said the ICRC’s Regional Director for the Middle East, Robert Mardini. “This illustrates just how deadly these battles have become. This is all the more alarming as offensives get underway in cities like Raqqa in Syria, or intensify in Mosul, Iraq. A new scale of urban suffering is emerging, where no one and nothing is spared by the violence.”

The conflicts in these countries have resulted in internal displacement and migration levels unprecedented since WWII. More than 17 million Iraqis, Syrians and Yemenis have fled their homes. And these battles risk becoming even more protracted if real political solutions are not found soon. Wars in cities are so devastating because of the way in which they are being fought. Armed parties are failing to distinguish between military objectives and civilian infrastructure – or worse, they are using or directly targeting them.

Nawal Al-Maghafi is an award-winning film journalist specialising on the Middle East. She has worked for BBC Newsnight, BBC World, Middle East Eye and Reuters amongst others. She has reported extensively from Yemen, focusing on the humanitarian situation and the West’s involvement in the conflict. Al-Maghafi was nominated for a Frontline Club Award 2017 for her film covering the human cost of the war in Yemen.

Pawel Krzysiek has been working in communications in Syria for much of the war for the ICRC, much of his work has been to cross the frontline of war zones, into besieged towns. He is a primary contributor to this report covering the section on Syria.

Joshua Baker is a documentary filmmaker and a journalist and a contributor to the ICRC Report focusing on the section of ‘Mosul’. Baker was on the frontline with Iraqi special forces as they pushed into civilian neighbourhoods during the battle for Mosul. He witnessed first-hand how civilians were being caught up in the fighting, particularly when a suicide bomb detonated right in front of him. He began his career in print working for The Times as Foreign News Night Editor. More recently Baker completed Africa’s Billion Pound Migrant Trail with Benjamin Zand for BBC.  Earlier this year he was an Investigative Producer on two films for BBC Panorama following the terror attacks in Manchester and London, where he secured access to a friend of the Manchester bomber. His film The Battle For Mosul (US title Battle for Iraq) for PBS Frontline and The Guardian was shortlisted for best TV Documentary category at the One World Media Awards and listed for a Grierson Award.

Roland Oliphant  is a Senior Foreign correspondent to the Telegraph and until recently covered Russia and the former Soviet Union from the Moscow bureau. He has reported on the Ukrainian revolution and civil war from Kiev, Crimea, and Eastern Ukraine.

Iona Craig  is an independent Irish-British journalist. Her work currently focuses on Yemen and the Arabian Peninsula. Iona lived in Sana’a from 2010 to 2015 as The Times (of London) Yemen correspondent. She continues to travel back and forth from the country to report on the conflict and deteriorating humanitarian crisis. In June 2014 she won the UK’s most prestigious investigative journalism award, The Martha Gellhorn Prize. Her reporting on an American drone strike that hit a wedding convoy in Yemen was awarded the Frontline Club print award for 2014.

Albina Kovalyova is Television correspondent and producer covering Russia, Ukraine, CIS for FSN and Channel 4 News. Kovalyova has just returned from East Ukraine after doing a report on the impact of fighting on civilian life in front line towns in the country.