Holy Lands: Reviving Pluralism in the Middle East, the new book by Nicolas Pelham, The Economist’s Middle East correspondent, formed the starting-point of the discussion. The author was joined by Patrick Cockburn, the Middle East correspondent for The Independent, Safa Al Ahmad, a Saudi Arabian filmmaker, and Firas Abi Ali, a senior analyst for IHS Country Risk. The discussion was moderated by journalist and political analyst Mina al-Oraibi.

Pelham argued that sectarianism in the Middle East is “an aberration and not the norm.” Religious communities and ethnic groups in the Middle East used to exist alongside each other in harmony. In his latest book, Pelham explores how a region which used to be the epitome of pluralism has been carved up by sectarian conflict.

Cockburn said Middle Eastern sectarianism has been on the rise ever since the overthrow of the Shah and the Iranian revolution in 1979. It’s difficult to envisage unity in the Middle East as long as the politics of war hold sway. “War naturally empowers those who are willing to be killed,” Cockburn said. “If the violence is reduced, fruitful political engagement is enhanced and order can be enforced.” 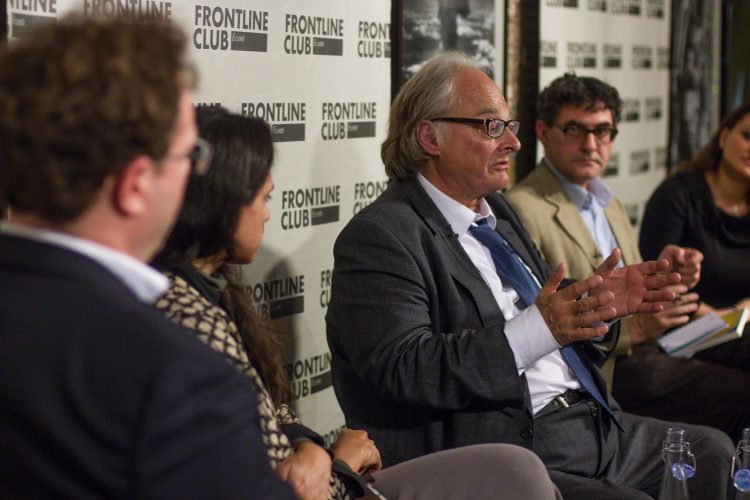 Reconciliation between the sects would only come at the expense of the individuals ranked below the religious leadership, Ali warned. “If you are a free thinker, a woman or fall outside the accepted norm, your neck is on the line.”

The Western and Arab media have portrayed the Iraqi conflict as a struggle between Shia and Sunni Muslims, Al Ahmad commented. “Media language is peppered with sectarianism,” she said. “The conflict is far more complex than simply a divide between Sunnis in the South fighting Shias in the North.”

Pelham agreed that there is a tendency towards oversimplification. “We apply a template to the region and divide up the areas that are Sunni and those that are Shia. The Middle East is much more complicated and the ideologies overlap. Purist sects aren’t the reality. Israel isn’t predominantly Jewish, more Muslims live there.”

There’s a lot of lazy journalism, Cockburn said. He attributed the inaccurate, simplistic reports to ignorance.  “Reporting from the ground is extremely difficult and the political alliances are constantly shifting.”

Peace and order in the Middle East will only be possible if interregional dependency is encouraged by the international community, Pelham argued. External intervention can achieve results. “International forces are heavy hitters and have enough leverage to negotiate cease fires,” Cockburn pointed out. However, he stressed that the heightened violence must be diminished before reconciliation can be achieved.