Lal Por nestles up against the Pakistan border bounded by mountains to the north and the Kabul river to the south. It is the capital of the district of the same name, which is sparsely populated apart from along the banks of the river that forms its southern limits. Although a bridge is under construction that would link the town to Afghanistan’s Highway One, at the moment there is no tarmac road leading to it or in military lingo “no hard ball”. The bridge is funded by the Provincial Reconstruction Team on a work to build programme, meaning that they pay Afghans to build their own projects in a scheme that is intended both to rebuild the infrastructure and pump money into the local economy. That said it may take a long time to finish, if it’s finished at all – think back to this story from the last entry. Even if it is finished it may just be a quicker way to get IEDs in.

The mountains north of the village are a known transit route for insurgents crossing in from Pakistan who then head north to resupply the insurgency in Kunar. They use the villages of Reneh and Parchaw located in an inaccessible valley that runs along the Afghanistan-Pakistan border as a staging post. Technically the villages sit on the Afghan side of the border but they might as well be in no-man’s land. Part of the company’s mission is to extend the coalition/government influence into these areas and stomp out these supply routes by strengthening the Afghan Border Police who are currently in no real position to stand up to the insurgents.

Lal Por was the destination of my second excursion out of COP Garcia. The mission included the usual meetings with local leaders and the police (KLEs). I found it amusing that the school principle asked for barbed wire, not to keep “bad guys” out but to keep the school kids in, a request that was prioritised.

The second part of the day’s activities was a patrol down a valley towards the insurgent’s known staging posts. There was authorisation to proceed east to a certain grid line along the sides of the mountain so as to get a view down on the routes that the insurgents must be using in and out of the valley. The grid line coincided with a steep bend in the valley’s path so that we wouldn’t actually be within sight of the villages. We dismounted from the armoured vehicles some two or three kilometres from the villages and regrouped with the ANA, bring our total to some 20 hats, roughly split equally between the US and Afghans. There was a certain tension in the air and when I asked if we were being watched the reply came “they’re always watching us – they count the vehicles out of the COP, they count the dismounts out of the vehicles, they know our fire capability, they know the works” after which a young soldier called over to me “I sure as hell wouldn’t be going up that valley without a gun”. My first thought was that I must have heard this in a movie and wondered who was imitating whom. 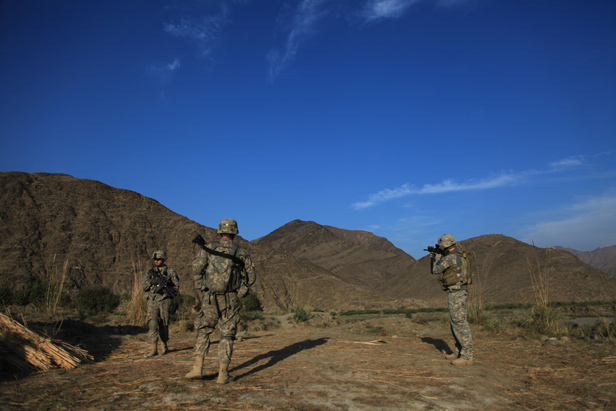 I would say I was too busy contemplating how beautiful the pictures across the valley to Pakistan could turn out but I was also a little rattled, or perhaps I was just excited. I’m sure that if I continue embedding “contact” is a strong possibility at some point but I wasn’t entirely sure that this was when I wanted it, not this soon and not on such a beautiful day with the sun throwing golden light across the valley. I thought about it a little harder and began to speculate “What if I’m about to be immersed into the deafening confusion of RPG explosions and bullets tinging past my ears?” Would my veins even be able to cope with the pressure that I anticipated on them as my heart would probably leap into the high 180s in a fraction of a second? I felt a rush rise up through my stomach, but no different to the one that you’ve felt before a track race, the start of an exam or interview or phoning a girl up for a date for the first time. I dealt with it by lighting up a cigarette and was annoyed to notice that that left me only one and decided to save it for the peak of wherever it was that we were heading to.

Climbing up the hills the valley floor began to reveal itself as a series of interlinked channels glistening in the evening sun, separated by islets, some of which supported thick vegetation. On the opposite side of the valley, the Pakistani sky line was already sinking into a darker blue and the Afghan’s pointed out the Pakistani observation posts perched on the crests of the highest mountains. It was the first time I’d been out in the open like this for a while and it was such a contrast to Beirut’s clogged arteries that nature’s tranquillity overwhelmed any thought of eyes that might have been prying down sights on the mountain slopes.

Looking down on the valley, you could clearly make out where vehicles had been coming and going to the village – although nothing said that they were anything other than innocent grocery runs. 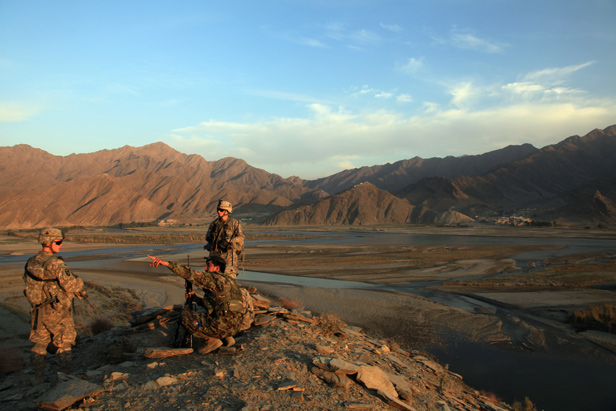 The aim of the short patrol was to get a better idea whether the unit would be able to approach the villages through the valley. Having reached the specified grid line and satisfied that they had pictures of the valley and a better idea of whether they could make it in, the Lieutenant turned to me and said “OK, business over, now it’s facebook time”. We climbed inwards taking the high road on the way back over a hill top where the American’s stopped to take pictures that would later be “tagged” and the Afghan’s phoned friends and family to tell them where they were. The hilltop was the natural place from which to defend the valley and was fortified with dry stone walls in trench-like dugouts rising up a whole side of the hill. Some of the Afghan’s set about kicking them down with surprising venom. As we paused briefly the lieutenant realised that the hill rising behind us was hill-top 911 and the irony was lost on nobody. Looking out over the valley towards Pakistan I enjoyed one of those rare little moments of pleasure built on nothing much more than coincidence but which seem so much more significant.

Even as we descended the hill somebody commented to me “if they’re gonna attack it would be as we’re going downhill” but the brief sensation of fear that I had felt as we grouped before departing now seemed distant and  unnecessary; I even questioned whether they hadn’t been pulling my leg.

Dinner that evening was a Meal Ready to Eat (MRE) which is still enough of a novelty to me so as to be looked forward to. I slept on the ground in the cold open air in what turns out to be a very bad sleeping bag. Surrounded by hescos and armoured vehicles I had the sense of being in a bubble, disconnected even from Kabul, let alone further afield, and unsure what was going on anywhere beyond the hescos.