Here Be Dragons: the “post-traumatic world” of Albania

Here be Dragons assumes the form of an intimate travelogue, tracking the director’s week-long stay in Albania as a jury member of Tirana’s 13th international film festival. Cousins explores Albania’s current cinematic culture, notably the plight of the national film archives, which sit in a state of disrepair, whilst reflecting on wider questions of trauma, history and memory in the context of post-communist Albania. Here Be Dragons interweaves shots of Tirana, namely the Pyramid of Enver Hoxha and other architectural remnants of the former totalitarian regime, with old film clips – emphasising Cousins’ sentiment that “to look is to travel”.

An audience member opened the post-screening discussion by noting the sense of “sadness” and “greyness” that, in his opinion, pervaded the film, and asked Cousins whether this was representative of present-day Albania.

Cousins responded that his aim was to document the “emotional landscape” of the nation and to capture the “balance between happy and sadness which you find in many places”.

“If you spend time in Albania, you do find that it is a kind of post-traumatic world. . . . It has had so many dreams thrust upon it, and so many of those dreams ended up to be empty dreams. And so people aren’t sure what to believe.”

He concluded that while the overall melody of Here Be Dragons was one of sadness, “there is a hopeful tune there, especially amongst the young people”. Cousins later pointed out that compared to all the Albanian films produced in the last five years, which he had watched in his capacity as a jury member of the Tirana International Film Festival, Here Be Dragons remained less bleak.

Boyd then paid tribute to the “phenomenal knowledge of the cinema” in which Cousins’ rooted his work, adding that the director balanced his filmic enthusiasm with “his considerable intellect . . . which is so rare in modern cinema”. 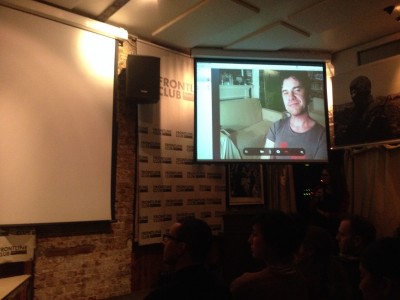 Another member of the audience, who had travelled to Albania on numerous occasions, asked whether dealing with a little-known subject matter involved a greater responsibility on the part of the filmmaker, as film plays a crucial role in the shaping of a nation’s identity. Cousins echoed this sentiment with his statement that “film legacy is a kind of autobiography of a nation”. The audience member also enquired as to the reaction that the film provoked in Albania, in particular from viewers outside of the creative community.

Cousins responded that Here Be Dragons had inspired an extremely positive reaction from Albanian viewers, with one critic naming it “the best film ever made by a foreigner about Albania”. Boyd confirmed the film’s positive reception, and stated that he found the Albanian people to be “sensationally not bleak . . . and really positive about what they call their ‘experiment’ to do with the future, and they felt that Mark’s film was a metaphor for what had gone before”.

A member of the audience asked Cousins to comment on the level of engagement of young Albanians with their national history, and their relationship to Albania’s past and future. Cousins responded:

“Most people [in Albania], young and old, realise that they have a toxic history. But one of the reasons why I think that I felt strongly that I wanted to make this film, was that I realised that every country has a toxic history. . . . England, Ireland and Scotland all have toxic histories. Right down the road from me there are big, fancy houses built from the slave trade . . . so I think there is a sense of solidarity in common humanity.”

Cousins concluded from his ‘study of looking’ that, with regard to the future, young Albanians had “a degree of optimism, but a massive amount of caution, and that’s what I tried to capture in the film”.

Cousins closed the discussion with an impassioned response to an audience member’s suggestion that the film expressed a certain sympathy for Hoxha’s communist dictatorship:

“I absolutely believe in equality, I absolutely believe that . . . the idea of serfdom . . . is one of the biggest crimes in history. Anything that tried to redress that, started out good. However, I ended up furious with Hoxha before I went there. . . . He poisoned this principle which is so important for emancipation and equality around the world.”

To find out more about the current plight of the Albanian Film Archive, and the work of activists to restore it, visit the site of the Albanian Cinema Project.
To watch the trailer for Here Be Dragons, and to keep up to date on upcoming filmic collaborations between Mark Cousins and Don Boyd, visit the website of HiBROW, and click here to follow the film on Facebook.