Hardly an auspicious start – fired upon on the first day . . . . surely not!

Before I get onto the matter of the title, I should just explain a little about why I’m in Afghanistan and what brought me here.

Over the next month(s) I’ll be writing stories and shooting pictures on a freelance basis, starting with commentary and articles for Executive Magazine, based in Beirut. If all goes well after the first month, I’ll stay on, particularly with a view to do as much photography as possible. However, I have another motivation beyond my work as a freelance journalist . . .

Starting in late 2008 I spent 18 months working for the European Union Police Mission in Afghanistan (EUPOL) as an Analyst and Reporting Officer. I lived on a compound in Kabul which was not much larger than a football pitch, into which the offices, much of the living accommodation and the leisure facilities – including two bars, which seemed quite unnecessary for such a small space with under 300 residents – were squeezed. The work could be challenging and from a personal perspective I learnt a lot – whether about Afghanistan itself, police reform in specific or the broader mechanisms of reconstruction efforts in a conflict environment and their endless complications and contradictions.

However, while the job certainly had its rewards, it also had its downfalls. Anyone who has had an opportunity to travel even modest portions of Afghanistan’s rugged terrain will tell you two things; firstly that the scenery is spectacular and, secondly, if they’ve had any opportunity to meet them, that the people are among the most proud and hospitable that you could meet anywhere on earth.

Now imagine yourself full of curiosity about this beautiful and intriguing country, sitting at a desk in the middle of its capital working on issues related to its development and yet rarely able to leave the compound on which you live (at least that is to more than a handful of security cleared locations) and therefore scarcely seeing anything of the place. In a word, it was frustrating.

In fairness, there are good reasons why much of the international community in Kabul lives under such conditions and I’m not criticising the difficult decisions that security officers and protection teams make that necessitate such measures; it’s just that personally I don’t feel I can really say that I’ve even been to Afghanistan until I’ve walked a little of its land and met some of its people, other than the few Afghans who worked at EUPOL and became my friends.

My saying this is probably compounded by the fact that prior to working with EUPOL I was a freelance journalist and photographer who took his liberty pretty seriously and wasn’t entirely devoid of an adventurous streak . . . so the obvious solution was to return to Afghanistan but this time in my usual guise as a freelancer. So here I am, which to be more precise right now is on an embed with the US military currently at Forward Operating Base Fenty, near Jalalabad in Eastern Afghanistan.

Some of you may be thinking to yourselves “embedding with US forces is hardly experiencing Afghanistan” and I’ll give you that as granted, but it is a way, and in large parts of the country where there is still a very active insurgency, which may be gathering steam, it is the only way.

In the coming month(s) I’ll be embedding with Task Force Bastogne in Nangahar Province, starting tomorrow for ten days, followed by two weeks with Task Force Rakkasan in Paktika Province. All going well, I’ll continue to Helmand to join the US 3rd Battalion 5th Marines, who recently took over control from the Royal Marines in Sangin. Between embeds I’ll spend time in Kabul following the civilian side of the equation.

I’ll also try and upload pictures as I go along. The first one I’ve added is simply because it was the first picture that I’ve taken in Afghanistan. It’s taken on a Hercules C-130 military flight from Bagram Air Field (BAF) on route to Jalalabad Air Field (JAF). For those of you who have spent time in Afghanistan and feel entirely cheated by the lack of acronyms that you’ve encountered in this entry, this one is entitled “BAF to JAF by AJP in AFG”.

But what about the shooting? Was I joking? Certainly not! But it looks like you’ll have to wait until the next instalment for that. 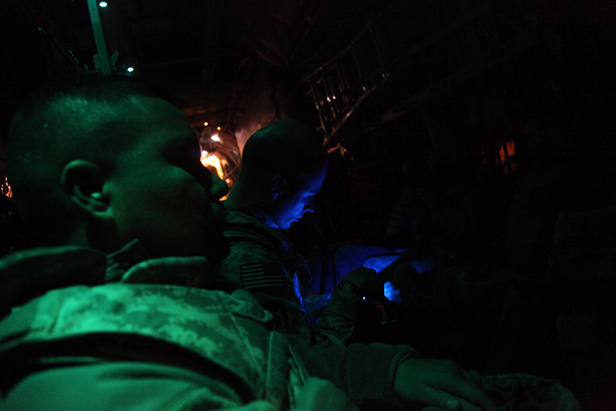