Granta: In Conversation with Janine di Giovanni and Charles Glass 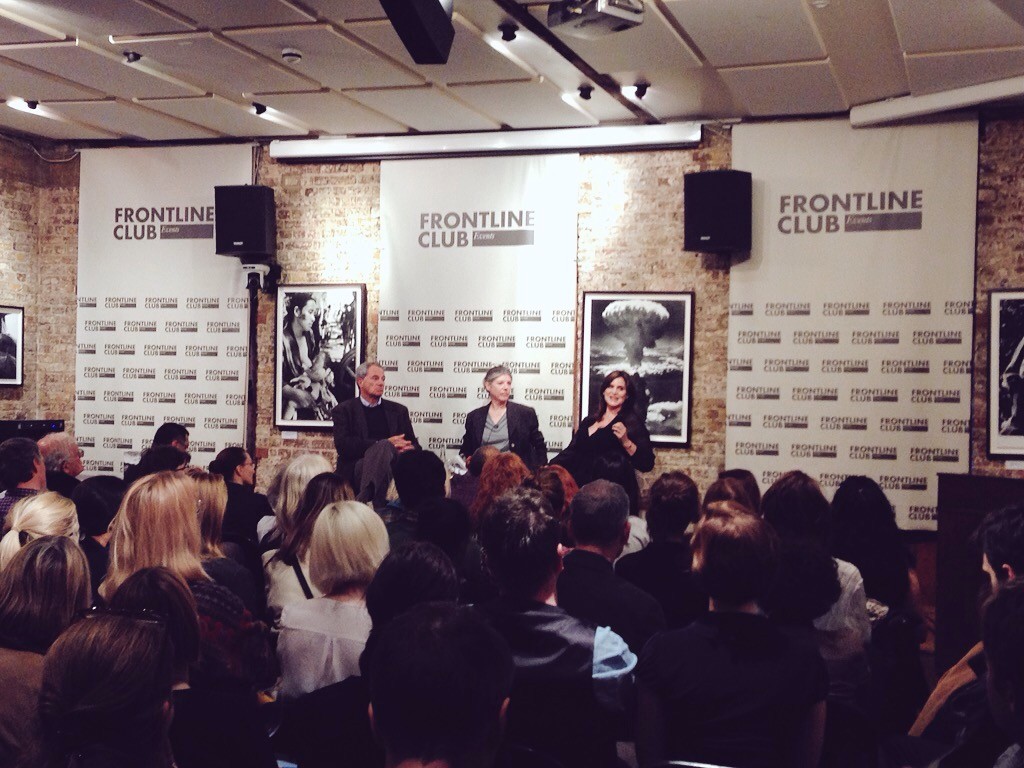 On Tuesday 5 May, Middle East editor of Newsweek Janine di Giovanni and veteran broadcaster and journalist Charles Glass joined an audience at the Frontline Club for an insightful discussion chaired by Sigrid Rausing, editor of Granta magazine.

Reflecting on the ongoing conflicts in the Middle East and the human realities of war, di Giovanni and Glass discussed their recent contributions to the latest edition of Granta: The Map is Not the Territory, which explores the distinctions between representation and reality.

“The theme that comes to me over and over when I think of Iraq is loss,” said di Giovanni. Her article, After Zero Hour, looks back on her time reporting on the Iraq conflict, remembering old friends who have since disappeared, emigrated or fled.

Di Giovanni described driving the length and width of Iraq prior to the 2003 invasion, aware that, as the impending war approached, many of the places she visited would soon cease to exist.

She read an extract from After Zero Hour: “With that invasion and the insurgent war that followed, Iraq would virtually disappear. The land of date trees, oasis and desert would be marked by checkpoints and graves.”

Glass followed with a short extract from his article, The Battle of Kessab, which examines the fate of the eponymous town in Syria. Kessab was the last remaining Armenian town in Syria, after the Turkish army relinquished control of portions of its border with Syria to Islamist rebels in 2014.Rausing responded to the reading: “What you describe so beautifully in the piece is really the context of the Armenian genocide. How everything that happens reminds people of the original genocide.”

An audience member asked Glass and di Giovanni to comment on the importance of lyrical writing in journalistic articles.

“We have the great privilege of writing poetically for Granta,” said di Giovanni. “For me, writing in a lyrical way in terms of narrative and characterisation is much easier.”

“This kind of language is so important,” said Rausing. “It’s the only kind of writing that will endure and have a life after.”

The discussion then covered the role played by journalists in stimulating positive political change, by providing on-the-ground evidence that can filter into policymaking.

“In some sense there’s a limit to what journalism can do. We can bring awareness, we can tell the story,” said di Giovanni. “The gap between reporting and policymaking is huge… there is an enormous gap between what is happening in the Security Council and in Obama’s office and what is actually happening on the ground. And that is hugely frustrating.”

A final audience question discussed the role of long-form journalism and an increased focus on human stories to encourage empathy and eliminate compassion fatigue.

“For the most part newspapers don’t have space… there are very few outlets. Thank god these things exist, but it’s hard to make a living doing that,” said Glass, highlighting Granta, The New York Review of Books and The Guardian as some of the few publications that champion longer pieces.

“For me it always comes down to the people,” said di Giovanni. “Then you could weave in the humanitarian disaster, you could get the political involvement in it, you could bring in the diplomacy… but I think it’s coming back. I think people want to read longer pieces.”