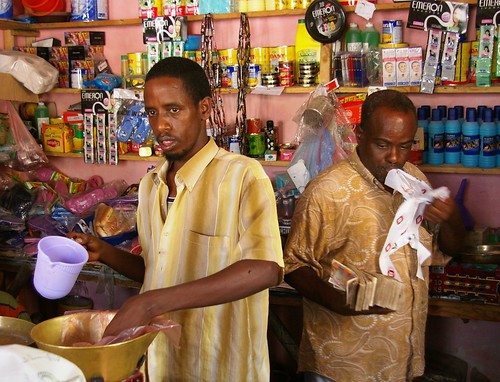 Last week’s bloody food riots in Mogadishu, Somalia, were a sad setback for a part of the city that is vital to Somalia’s future. The riots, a spasm of the growing global food crisis, were centered on the central Bakara Market. Several people died when soldiers opened fire on protesters.
Prior to the late-2006 Ethiopian invasion of Somalia, Bakara was a thriving commercial center and the major engine for the country’s recovery from 15 years of war and anarchy. After the Ethiopians occupied Mogadishu, Bakara became the main battleground pitting the Ethiopians and their allies in the clan-based “transitional government” against insurgents from the Al Shabab nationalist group.
So much goods were left behind when vendors fled the market that many people had no choice but to sneak back into Bakara to salvage what they could. An associate of mine was caught in a crossfire while doing just that: one of his friends died. Every day, Mogadishu hospitals received a dozen patients wounded in Bakara. Even Ali Mohamed Siad, Bakara’s chairman, fled, leaving behind a once-thriving logistics business.
But now it appears Siad and others have negotiated a deal with the transitional government that might enable Bakara’s recovery. Just a couple weeks back Siad told me that government soldiers had withdrawn from the market: when they left, so did the insurgents, for the most part. Last week’s food riots signaled a slide back into violence, but hopefully not a permanent one.
So what was the deal Siad negotiated? According to one Somali pundit, Bakara businessmen agreed to hop off the fence and take a firm stand against Al Shabab, declining to harbor them or overlook their activities:

The Mogadishu business communities … who are mainly represented by the Bakara Market, had finally seen the light by taking full responsibility for the security of their own interests: the unfettered daily transactions of business and its bottom-line profit and livelihood making. In doing so, the terrorists are denied any support from those quarters; as a result, no attacks from in and around the Bakara Market against the government/ally begets no military response from the government.
Obviously, this has been a 360-degrees turn around by the Bakara business establishment from their early days of being duplicitous with bandits or feigning ignorance about their own collusion with the terrorists; what made them change is the damage they had incurred by the crushing firepower of the Somali government.

I’m not convinced that Siad and his associates were truly in “collusion” with Al Shabab — it’s more likely they were simply trying to appear neutral in a bloody fight between equally unpopular combatants. Nor am I convinced that the transitional government’s “firepower” motivated any changes of heart among merchants.
Based on my conversations with Siad, I think Bakara merchants — and many Somalis, for that matter — are simply tired of war. With the African Union peacekeepers growing in strength and effectiveness, and with the U.S. (for better or worse) targeting extremists south of Mogadishu, it probably seems a safer bet these days to side with the transitional government and international forces than to balance between them and the insurgents. It’s risky, to be sure: U.S. air strikes could backfire by stoking hatred of foreigners; and the transitional government just might turn out to be the worst kind of ally: brutal, unreliable and ineffective. And to the individual businessmen who now oppose Al Shabab, there is the risk of violent reprisal.
Still, there’s reason to hope. Bakara just might return to its pre-invasion vitality, driving slow but steady improvement in Somalis’ daily lives.
(Photo: me)