It’s supposed to be a Superwahljahr – a super election year in Germany.

Yes, we’ve seen many elections of the state and city variety, but you could hardly describe the campaign leading up to Sunday’s general election as "super".

And why? Well your correspondent wonders if anyone in Germany is potentially excited about casting their ballot or about the possibility of, dare I ask, change? However great or small that may be.

Just to jog your memory, the Christian Democrats (CDU) of Chancellor Angela Merkel, and their Bavarian sister conservative party the CSU, govern in a Grand Coalition with the Social Democrats (SPD). The Foreign Minister, Frank-Walter Steinmeier (just call me Frank) is the SPD’s candidate for Chancellor.

Having seen the way Berliners turned out to hear a speech delivered by an American Democratic Party Presidential candidate in 2008, you might have been mistaken for thinking that Germans would relish their own political contest a year later.

Well, nein. And don’t put it down Germans finding Oktoberfest and all things to do with beer, Dirndl and Lederhosen more interesting at the moment – that’s just down in Bavaria.

Just a few days out before the country go to the polls, any real contest of vision or of issues such as a minimum wage, unemployment,  environment/renewable energy, troops in Afghanistan or the dreaded global financial crisis seems to have evaporated. Not even the upcoming 20th anniversary of the fall of the Berlin Wall is raising the pulse of the electorate.

Even the much vaunted TV-Duell between Frau Merkel and Herr Steinmeier, saw little real debate or political sparks fly. It was more of a Meet the Press style programme with four journalists posing questions to the two leaders.

Actually it was a very polite exchange of… yawns, well at least in my living room. Reading the #tvduell twitter stream was more interesting.

Instead the entire campaign is coming down to two words: coalition/combination.

Neither the CDU nor the SPD are likely gather enough votes for a majority in the Bundestag.

That means German media coverage is now concentrating on possible coalition options for the CDU/CSU or SPD to govern with the minor parties – the Free Democrats (FDP), the Greens (die Gruenen) and the Left Party (Die Linke).

Coalitions in German politics are all about colours, and not just coloured pie charts. Let me give you some examples.

Currently there’s the Grand Coalition of Schwarz-Rot. Black for CDU/CSU and red for SPD.

A so-called "Ampel" or traffic light coalition would be:

Another favourite of political pundits is the "Jamaica Coalition":

And don’t forget the Tigerente coalition of BLACK (CDU/CSU) and YELLOW (FDP). A Tigerente, if you didn’t know is a tiger-duck. The cartoon creation of artist-author Janosch. This is the centre-right coalition that both the conservatives and liberals hope to form.

The colour coalitions are made all the more confusing because the Left Party like using the colour red too. So, conservatives talk up the threat to German industry, banking and taxes by any potential RED-RED coalition between the Social Democrats and the Left Party. But, the SPD have been keen to tell voters they’re keeping the Left Party at arms length and are not considering joining forces in the Bundestag.

No one it seems wants to play coalitions with the Left Party. But this political force that grew out of the former East German Communist Party is not to be ignored. The Left Party have consistently won new voters in recent state elections, and not just in eastern states.

In all of this you’ll be happy to know that there’s also the Piratenpartei – the Pirate Party. Maybe they might follow the example set in Sweden and gain a toehold in the German parliament?

As I wander around my home city of Bonn, this political poster has sort of summed up the final days of the campaign for me. 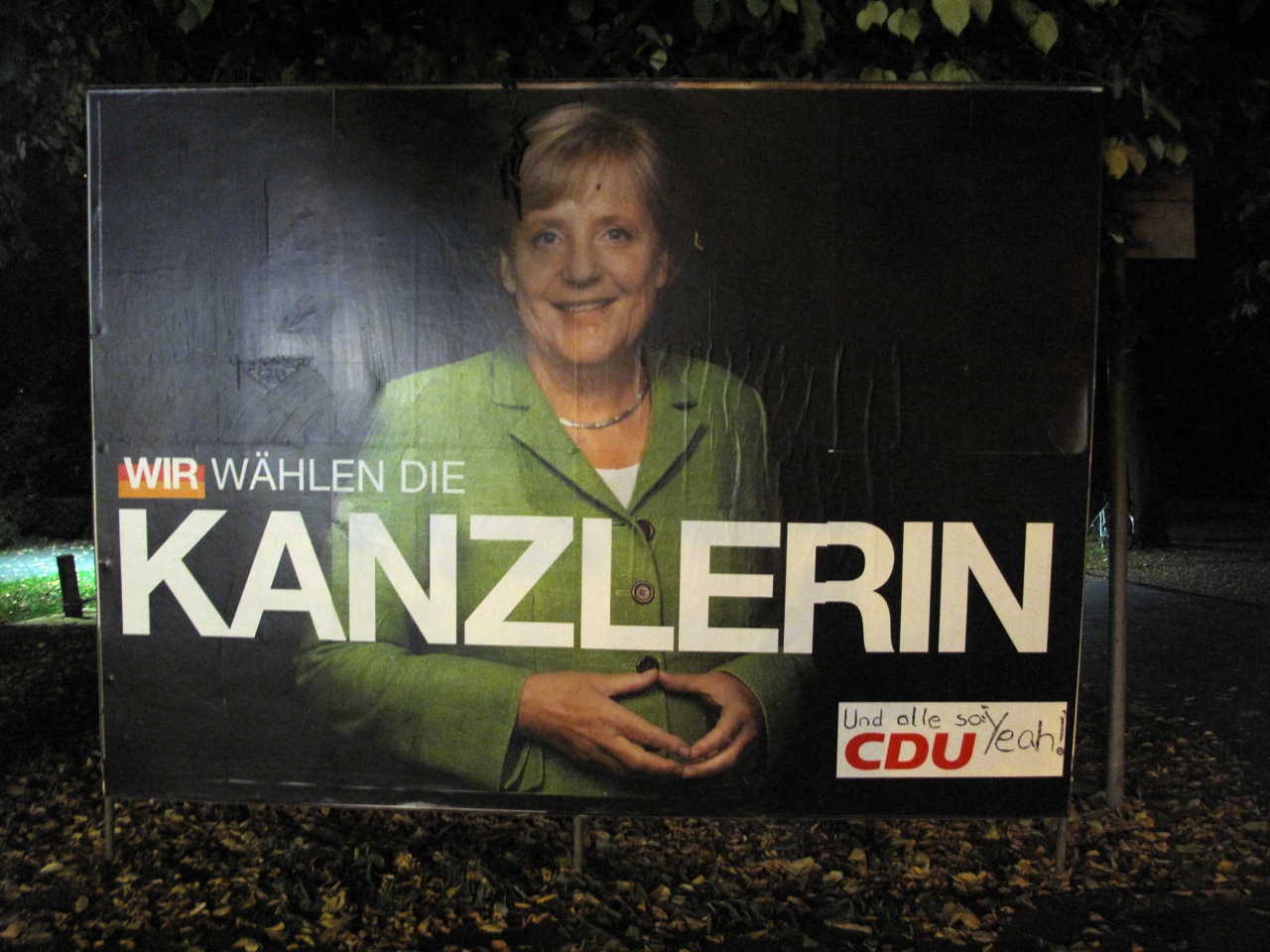 Frau Merkel wears a bright coloured jacket, pleasing to the eye. Her media trained hands are neatly positioned. The poster sits at perfect spray paint height, yet no street artist has bothered to enhance the Chancellor’s appearance. There is however a little scrawl in what you might call crude Denglish. 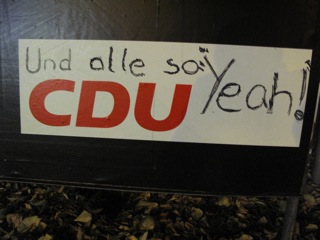 A note of apathy? Hmmm, maybe. But more likely a little joke at Merkel’s expense connected to flashmobs.

I’m waiting for a last ditch political "spray" from any of the political leaders before Sunday. At this stage, I’d even settle for a lively DJ set by the Economics Minister, (Baron) Dr Karl-Theodor von und zu Guttenberg.

As for me on election day, I’ll be looking out for a little experiment the German public ARD network is attempting with reporters producing video-blogs with the iPhone 3GS. Oh, and tuning into Bavarian telly with a beer for a little sing-a-long.