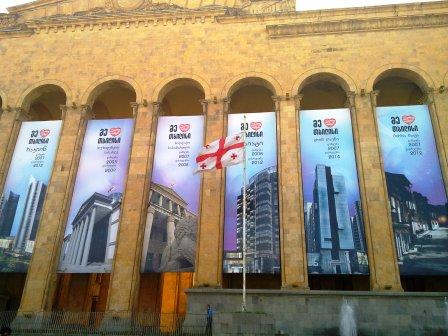 Strange scenes outside the Georgian parliament: the entire façade of the building seems to have been transformed into a giant advertising hoarding to promote various urban reconstruction projects and new luxury hotels. It’s part of a new billboard campaign (slogan: ‘I Love Georgia’) which appears to be intended to boost public confidence as the country’s economy goes through tough times. Foreign investment fell by more than three-quarters in the first half of 2009, and the Georgian economy could shrink by up to 4 per cent this year, according to the finance ministry. The war with Russia in August 2008, political turmoil, street protests and the global financial crisis have all had an effect on an economy which was growing rapidly just a couple of years ago.

With investor confidence damaged and the tourist trade suffering, the Georgian authorities have also spent big on another high-budget promotional project. They’ve commissioned ten photographers from the respected Magnum photo agency to shoot images which apparently “capture the country’s contemporary cultural mystique through a grand photographic lens” for an upscale coffee-table book entitled Georgian Spring (which, of course, includes photos of President Mikheil Saakashvili going about his business in his usual charismatic fashion). Is this a bold, creative response or just expensively-packaged hubris? Saakashvili insists that Georgia now has the chance to move towards a "very significant economic breakthrough", although the IMF believes that the country’s financial woes will continue into 2010.