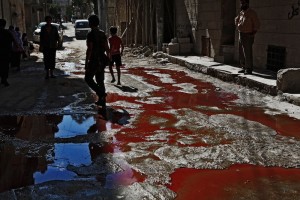 For the first session of the evening, you will see a selection of presentations compiled by photojournalists in the field, previewing some of their latest pictures. We will be featuring work by:

Daniel Berehulak, an Australian photojournalist who has covered the Iraq war, the trial of Saddam Hussein, child labour in India, the war in Afghanistan and more.

Eman Mohammed, who started her career when she was 19. She is Gaza’s only female photojournalist. Her work documents the Israeli/Palestinian conflict, including incursions, invasions and at times all out war.

Born in Seattle, Tim Freccia has travelled the world covering crisis and conflict as a photojournalist and filmmaker.

Spanish photojournalist Alvaro Ybarra Zavala was introduced to photography as a child by his grandfather. He has worked in Chechnya, Iraq, Afghanistan, Congo, Uganda, Columbia, Lebanon, Darfur and more.

This selection has been curated and compiled by multimedia photojournalist and filmmaker, John D McHugh.

After a brief hiatus for drinks in the members’ clubroom courtesy of Chivas Brothers, we will be joined by photojournalist Robert King and The Times’ Anthony Loyd. King will be presenting his latest work, published in the first comprehensive photojournalistic book about the war in Syria, Democratic Desert: The War in Syria.

The book chronicles the brutal and tragic reality of the conflict and the cost paid by the Syrian people. As the conflict escalated many journalists left the country but King stayed and continued to document the blatant targeting of civilians and the numerous human rights violations and war crimes that have been committed.

Robert King, native of Memphis, Tennessee, is an award-winning photojournalist with no formal education in the field of journalism. He has worked around the world for leading publications from war-torn Bosnia, Afghanistan, Chechnya, Rwanda, Kosovo, Albania, Georgia, Armenia, Azerbaijan, then-Zaire, South Africa, Russia, Iraq, and Mexico. His work has been published in LIFE, The New York Times, TIME, Newsweek, VICE, The Guardian, Rolling Stone, Stern, Paris Match and many others. His career as a photojournalist has been chronicled in the award-winning documentary Shooting Robert King.

Showcase is a new event that incorporates the best of Frontline: compelling debate, inquisitive film, insightful discussion, thought-provoking surroundings, stimulating company and refreshing beverages. The evening will feature two sessions with a break between when you will be welcomed into the members’ clubroom. Here you can meet your fellow audience members and enjoy a drink courtesy of Chivas Brothers. Photograph: Robert King