From Colombia: an unusual expedition in the Andes

In the beginning of July an unusual expedition took off from the south of Colombia towards Ecuador. The Ruta Inka takes young people from all over the world to traditional Andean communities. 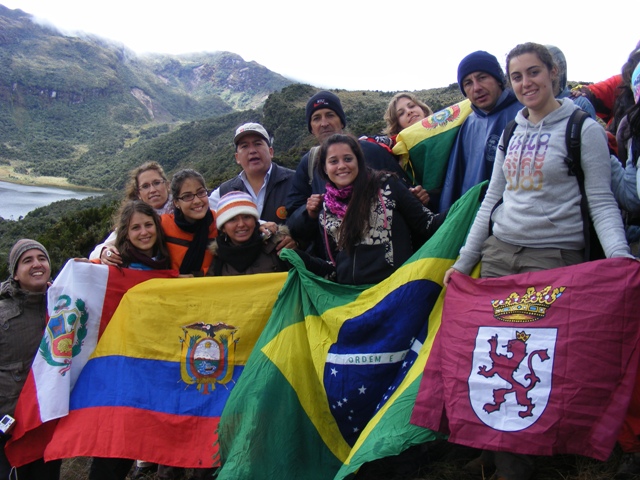 On July 4, a group of 35 youths from 11 countries such as Peru, Bolivia, Paraguay, Brasil, UK, Spain and Poland started gathering in the city of Pasto, south of Colombia, on the Andean mountain range.

They were cheerfully greeted by local authorities and local residents. Dozens of students from Pasto volunteered to show the city to the foreign visitors.

That’s the spirit of the Ruta Inka, an expedition in which Andean communities host youths mostly from Latin America and teach them about their history and culture.

Students must be recommended by their universities or local authorities. Universities such as San Marcos in Peru, a Loja in Equador and Sevilha in Spain engage in the program.

The youths pay 300 dollars to take the 40-day trip through communities that once were part of the Inca Empire in the 15th and 16th century – before it was destroyed by Spanish colonizers.

“Now with the UN convention on indigenous rights there is more self-esteem and interest in learning about our culture – which we were taught to be ashamed of through cultural aggression”, says Ruben La Torre, the mastermind of the expedition, himself a descendant from Quechua indigenous from Cuzco in Peru. “That’s what we try to say with the Ruta Inka: why be ashamed of being indigenous if the best students in the world come here to learn about your culture while their culture is in crisis?”

He started the Ruta in 2002 and so far has taken over 400 students to the Andean region, following a different route every year. At first the idea was to offer an alternative to the Ruta Quetzal, an expedition funded by the Spanish Crown that takes distinguished students from Europe to the most famous Inka trails every year.

For Ruben la Torre, the Ruta Quetzal can be seen as a new form of colonization. “The Ruta Quetzal shows typical indigenous dances, but the natives feel it’s not their event, they end up being amazed by the publicity and the press… They are not the organizers but mere expectators.”

Since its first edition the Ruta Inka has been completely based on the goodwill of the communities since it has no funding from governments. The idea is to reproduce the ‘mingas’ used by the Incas, in which every resident of a region would volunteer to build a bridge or an aqueduct that would benefice everyone.

The result is a different and innovative form of tourism. In Pasto, for instance, the participants were housed and fed in an army base together with the Colombian forces.

“Being here with the soldiers made us feel like part of the team… We wake up with them very early and quite sleepy. It’s not like in traditional tourism in which everything is given to you, it’s great because you can relate to people, we talk to the soldier and get to know how they live, what are their ideas. It’s very interesting”, says 28-year old Wilson Oveñas from Ecuador: 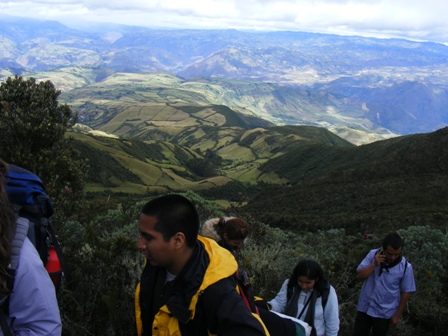 In the village of Yacuanquer, residents led the way on the 2-hour track to the Telpis lake, at the Galeras National Park. After a steep hike through the green Andean mountains, villager Jesus Omar Oban told students a story he learned from his grandfather:

“The lake has a spirit that makes it rain when visitors are making a mess, so they will run away… When it’s quiet the water is calm but when there are too many tourists there are waves and the lake gets upset”, explained the villager Jesus Omar Oban.

After the hike the expeditionaries were greeted with a meal with choclo, a local type of corn, habas, an Andean type of bean, and home-made cheese before watching a presentation of traditional dances.

This year the Ruta Inka follows its way through indigenous communities, vulcans, lakes and natural reserves in southern Colombia towards the border with Ecuador. It then visits the Ecuadorean municipalities of Carchi, Pichincha, Cotopaxi and Chimborazo until it reaches the biggest archaeological site in Equador, Ingapirca, by mid-August.

There participants will be hosted by the indigenous government of Canar, a community that takes pride in descending from the Incas.

For Spanish girl Alba Julia Pizarro, 18 years old, the route has changed her way of seeing South America’s history. “It changes a bit your vision of the Andean peoples and how we arrived here and most times destroyed everything. Of course it makes one feel sorry, but at the same time it opens the mind and teaches the vision of the conquered ones because we always study history from conquerors’ point of view”.