Anti-dog fatwas, famous Lebanese chefs and comedy shows in Saudi Arabia: reporting the under-exposed side of life in the Middle East 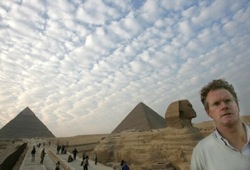 From bloggers taking on the government in Bahrain to a satirical comedy show that has attracted millions of viewers and caused outrage in Saudi Arabia, Neil MacFarquhar has always been drawn to the people and groups that influence daily Arab life, steering away from more typical tales of conflict, death and revenge when he can.

Now United Nations correspondent for the New York Times, Arabic speaking Neil MacFarquhar will be at the Frontline Club on 14 April to talk about his book The Media Relations Department of Hizbollah Wishes You a Happy Birthday and his insight into a region he has known since his childhood years in Libya.

Click here for more of Neil MacFarquhar‘s articles and video reports for the New York Times and here for more information and reviews of the book, which the Washington Post named one of the best of 2009.