From Our Own Correspondent: The Future of Foreign Reporting

Hugh Levinson, senior producer with BBC Current Affairs Radio, began the evening by reminding audience members that they were a crucial part of the broadcast and encouraged questions and comments. Amongst those in attendance were Christina Lamb, eminent foreign correspondent for The Sunday Times; top radio critic Gillian Reynolds; and Tim Whewell, BBC correspondent and many time contributor to From Our Own Correspondent.

Bennet-Jones began the discussion by asking the panel to comment on the most significant changes to foreign reporting in recent years.

Lindsey Hilsum responded that technology had had the greatest impact on the field, and commented on the speed and ease with which news can be communicated whilst on assignment abroad.

A clip of Gabriel Gatehouse’s ‘Reporting From Iraq’ from 2014 was played: “I tried to keep my fear of an IS ambush at bay; to keep the images of beheaded journalists out of my mind. I focused on the now – what was going on? Had our route been blocked? Or were we lost? Neither seemed like an appealing prospect. ”

This prompted Bennet-Jones to ask the panelists: “How often do you feel frightened?”

Lyse Doucet replied, “The front line is no longer the front line, it goes through streets and houses… from all the threats kidnapping is the worst.” 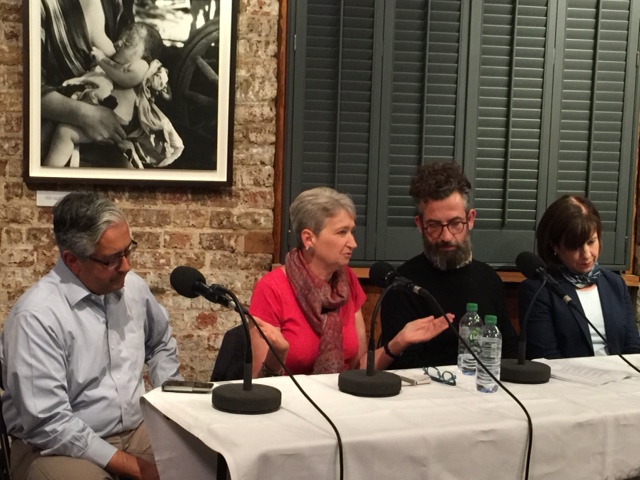 The journalists then discussed the extent to which personal voices are appropriate in From Our Own Correspondent. An extract from Fergal Keane’s 1996 ‘Letter to Daniel’ broadcast was played, which provoked strong reactions – both positive and negative.

Keane’s broadcast was composed as he held his newborn son in his arms: “Like many foreign correspondents I know, I have lived a life that, on occasion, has veered close to the edge… Now, looking at your sleeping face, inches away from me, listening to your occasional sigh and gurgle, I wonder how I could have ever thought glory and prizes and praise were sweeter than life.”

Gillian Reynolds was called upon to give her opinion on the piece: “It made me want to vomit,” she laughed candidly.

Whilst foreign correspondents are often reporting disaster from war-torn or disaster-stricken areas of the globe, Lyse Doucet commented on the necessity of humour. “Humour is the most important language,” she said. “I use it to get through checkpoints, to understand people. We can’t just do grim.”

The discussion drew to a close with comments from both the audience and panel as to why From Our Own Correspondent has been so successful and endured for sixty years.

“It’s like a buffet,” said a member of the audience, and suggested that it feeds you with bits of news that you didn’t even know you were interested in.

Lindsey Hilsum concluded that she’d loved writing for the programme and continued to compose unpublished pieces in the style of FOOC.

The recording will be broadcast on BBC Radio 4 at 9:00 AM on Thursday 17 September.