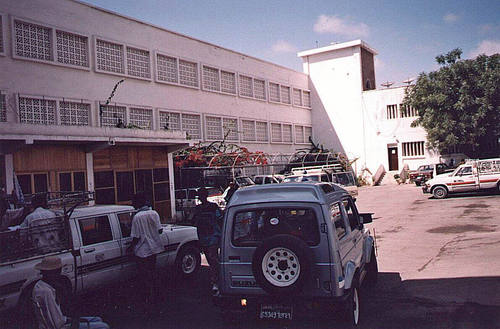 Two French journalists were kidnapped in the Somali capital Mogadishu this morning. Gunmen snatched the duo from the Sahafi Hotel (pictured above) where most journalists stay when visiting. I’ll add more to this post as and when I get information,

Somali gunmen stormed a hotel in the capital Mogadishu and grabbed two French journalists on Tuesday, a hotel worker said.

"Several gunmen entered the Sahafi Hotel, pointed guns at the guards and went into the hotel rooms where they took away the two French nationals," the hotel manager who declined to give name told Reuters.

"The two males told me they were journalists," he added. (Reporting by Abdi Guled; Writing by Wangui Kanina) link originally via a BreakingNews Twitter tip off.

(10) Gunmen wearing Somali police uniforms turned up at the guest house, seized the two reporters and took them in a vehicle towards a part of the city run by insurgents, said witnesses. link

UPDATE: Reuters is reporting the two "journalists" are in fact security consultants posing as journalists,

A government official, who asked not to be named, said the two French men had been posing as reporters for their own protection.

"They were security consultants who arrived in Somalia to train State House security guards, not journalists," the official said…

… It was not immediately clear who had taken the men, but a pro-government Islamist militia blamed dissident troops.

"Negotiation is under way for their release. Maybe they are demanding ransom, I don’t know the exact amount. But we are doing our best for them to be released soon." link

The Telegraph’s Colin Freeman and photographer José Cendón were kidnapped and held for six weeks earlier this year. Meanwhile, freelance journalists Amanda Lindhout and Nigel Brennan after still being held hostage after being kidnapped in Mogadishu in August, 2008. Their driver and fixer were released in January, 2009. This new kidnap comes at a time of "fresh fighting" in the north of Mogadishu, although one could argue fighting never really gets the time to go stale in Mogadishu…

Photo of the Sahafi Hotel by Garas Balley