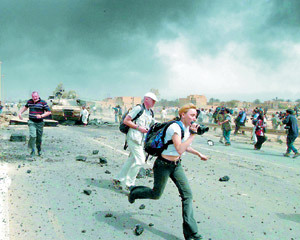 Bulgarian freelance journalist Elena Yoncheva has reported from many conflict zones for Bulgarian TV channels. She talks about her time in Somalia in The Standart newspaper today,

Have you ever been under attack while on the move in Somalia?

I was twice on the verge of being kidnapped. Once we were followed by a jeep with five gunmen, who wanted to abduct us. Each time we take a different route when we go to or from a place, even when that place happens to be our hotel, which as a matter of fact is very well guarded. The locals see us as walking money sacks. One of my assistants here told me once he was driving at least ‘a million dollars’ in his car and he was referring to me! I am the only white woman in Puntland. In the beginning I thought Somalia wouldn’t be so scary, resting on my previous experience as a journalist, but I must admit I’ve never expected to see anything like it. link