This Preview screening of the Open City Docs Fest London 20-23 June 2013 will be followed by a Q&A with director Lukáš Kokeš moderated by Michael Stewart, Founding Director Open City.

Over 20 years after the collapse of the Soviet Union directors Klára Tasovská and Lukáš Kokeš travel back in time on their visit to the unrecognised Pridnestrovian Moldovian Republic. Also known as Transdniestria, this separatist region within Moldova has its own passports and stamps, organises presidential elections and maintains its own legal system.

In Fortress Tasovská and Kokeš raise what is left of the iron curtain to give a fascinating peak into a country that technically does not exist.  They capture everyday life through portraits of ordinary people living in this geo-political gap, stuck between the European Union and Russia, between the present and the past, crime and decency, decadence and hope for change. 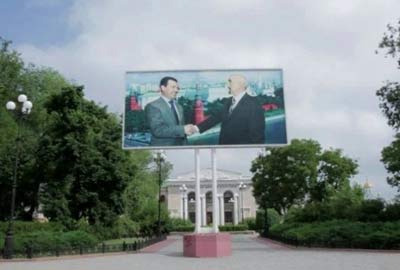 For twenty years president Igor Smirnov maintained Soviet-style propaganda and established an authoritative rule. Filmed during the 2011 presidential elections, Fortress is a sharp and darkly funny account, analysing the configuration of this ‘limbo-state’ and the practicalities of a regular life within it.