Food on the Frontline 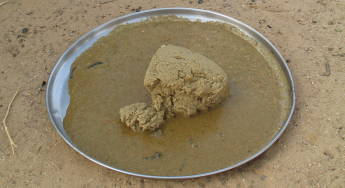 Assida is a thick porridge made from ground millet and is one of the main staples of Darfur. It’s eaten by plunging your fingers into the stodgy mound, scooping out a scalding-hot lump and mopping up some of the sauce. For most of my five days with rebels of the Justice and Equality Movement it was served with a gloopy sauce made from okra (with the sort of consistency favoured by makers of the gunge that goes in children’s television, erm, gunge machines). The assida itself had a gritty texture – I think from the large amounts of sand that swirled constantly in the air – but didn’t taste that bad. It was hot and filling and kept me going until dinnertime.

It is only now, looking at the photograph, that I realise it is exactly the same colour as the sand of Darfur.