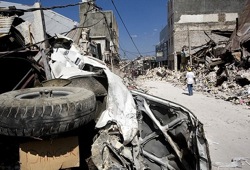 This month we will focus entirely on Haiti – looking at the country’s recent history and looking ahead to the meeting of international donors at the UN in March.

We are hoping that a member of UHUK will be able to join the discussion with:

Orin Gordon  of BBC News and former head of the Caribbean Service, who has extensive knowledge of Haiti and reported from there for BBC Radio 4’s Crossing Continents programme and  Astrid Zweynert, deputy editor of AlertNet, a news service for people working for humanitarian organisations, has been working on the Thomson Reuters Foundation’s Emergency Information Service in Haiti and has insight into the aid operation on the ground.

They will be discussing what lies ahead for the country with:

Peter Hallward, professor Modern European Philosophy at Middlesex University and author of Damming the Flood, Haiti, Aristide and the Politics of Containment, a book which examines the "imperial sabotage" by the US and France of President Jean-Bertrand Aristide after his election in 2000.

Clare Lockhart, co-founder and CEO of the Institute for State Effectiveness who works to build good governance with leaders in countries around the world to build stability and prosperity.

Hallward writes on the Guardian’s Commentisfree, that much of the devastation wreaked by the earthquake "is best understood as another thoroughly manmade outcome of a long and ugly historical sequence".

If the international community is serious about helping Haiti they will "need to stop ­trying to control Haiti’s government, to pacify its citizens, and to exploit its economy" and "to start paying for at least some of the damage we’ve already done," Hallward argues.

The catastrophe presents the world community with "the immense responsibility of a wise response", argues Lockhart,  who is co-author of Fixing Failed States: A Framework for Rebuilding a Fractured World.

But can we rely on international donors for a "wise response"? We will be hearing from Christian Wisskirchen, a founder member of the Haiti Support Group,on the issue of reconstruction: Does the Western aid policy that has been drawn up for Haiti represent a threat to Haiti’s reconstruction as he suggests?