Filming the Unfilmable: Between The Lines Evening of Shorts

A bleak and urgent tone was set, starting with Travers Hawkins’ film 1000 Voices. It dealt with the reality of asylum seekers held in indefinite detention centres across the UK. The inhumanities the detained face were conveyed through authentic voice recordings juxtaposed with animation and performance art. Travers Hawkins said, “all the footage is suggestive.” He explained that the multiple mediums used were born out of their limitations, stating:

“There was talk at one stage of smuggling in camera phones and getting that kind of footage. . . . But then you have to ask yourself a question whether that kind of footage is better?. . . I think there is also an opportunity when you are denied access to film the subject to create something new and to use new forms of documentary expression.”

Branco also struggled with having to obey protocols in the pursuit of his story. In his film, The Death of Corporal Rivierè, he followed French troops to Afghanistan’s Surobi Valley and told the intimate story of one soldiers’ burial. He expressed his frustration at finding out that the images he had captured could not be made public:

“I was pissed off a lot and I was wondering how can I succeed in giving the feeling of being true to my audience without lying to the audience.”

He achieved this balance with the help of cartoonist Adrien Demot who drew the censored images, thus conveying the story without breaking any rules. Through both Travers Hawkins and Branco’s films the blurred boundaries within the aesthetics of reality were brought to light. 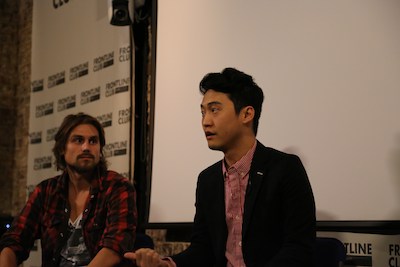 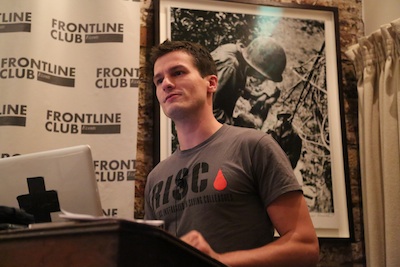 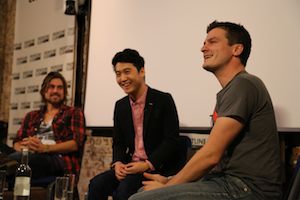 Death of a Prisoner by Laura Poitras also dealt with the direct reality and consequences of death in a war context. This time it was a disturbing portrait of a deceased Guantanamo Bay prisoner. His is a final journey home  in a coffin to his family in Yemen after suffering great physical and psychological trauma in captivity which lead to his death. A glimpse into an individual tragedy, in view of a far bigger picture, had the effect of silencing the audience.

Evidently, creativity became the key in many of these films to overcome technical boundaries. Performance art itself empowered by a social statement was the subject of Maryam Ebrahimi’s film, The Death Row. This portrayed an act of defiance made by a group of 15 females in Kabul dressed in traditional mourning robes in a plea for Afghan women’s right to education. As they stand anonymously side-by-side the footage focuses on their audience of bewildered locals passing by.

Perhaps the most uplifting of the journeys was captured in Lee’s Letters from Pyongyang. A touching story which sees Lee make the journey with family in Canada to reunite momentarily with their long-lost relations isolated in North Korea. Their joyous reunion proved to be a painful reminder of the lost time stolen from them. From idea to completion this project took five years. The audience wanted to know how Lee had permission to film in North Korea. He explained that gaining a visa was the hard part and that in terms of filming:

“I was there on a very personal mission. My intentions were very clear from the beginning when I was in contact with the North Korean authorities.”

In both content and access it would be an understatement to describe these films as difficult. However  Lee made an important point with regards to this in explaining that the complexity of the film process should not eclipsing the films’ subject. He spoke for the three filmmakers present when he said, “we stayed true to our stories.”