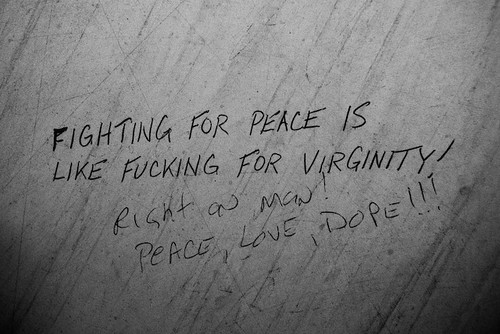 Zoriah is a photojournalist reporting from Kuwait and into Iraq. He’s using a blog to document his work and some of the quirkier sights he encounters. For example, the toilets stalls on Ali Al Salem Air Base in Kuwait,

Photography in Ali Al Salem is strictly forbidden, but I spent most of today shooting pictures without causing damage to Americaâ€™s security. Some graffiti on the wall in the latrines caught my eye, so I went from stall to stall and photographed more than 60 toilette stalls. Ranging from profane and racist to funny, poetic philosophical, it was an interesting glimpse into the minds of the soldiers heading into, and out of Iraq. link