Few left to tell the story 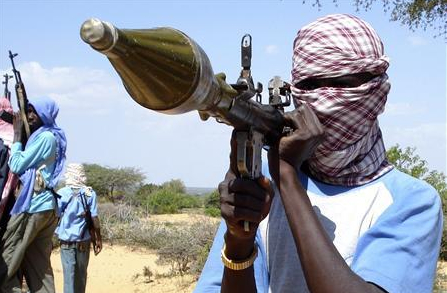 These past few days have been littered with tales of misery coming out of Somalia. On June 7, a Radio Shabelle journalist shot dead, the fifth journalist killed this year. Ahmed Omar Hashi, was also shot but survived. Hashi called Frontline blogger David Axe from his hospital bed asking for help. David is trying to raise the $1,500 needed to get his friend out of the anarchic capital to relative safety. Local journalists are understandably frightened,

“We are in a very difficult and dangerous situation. We are being forced to choose between reporting on what is happening and our lives,” Hamdi Kadiye, an executive member of the National Union of Somali Journalists (NUJOS), told IRIN.

The killing on 7 June of the Radio Shabelle director Mukhtar Mohamed Hirabe has added to pressure on journalists in the capital.

“All we do is cover the story. We don’t side with any group, but the fighting groups want to silence us to make sure no one hears or sees the suffering they are causing,” she added. link

All this after an unusual glut of foreign reporters reporting from Mogadishu, Puntland and elsewhere in recent weeks. The Guardian’s Ghaith Abdul-Ahad reported from “one week in hell”, our own Ruud Elmendorp spoke to people in and around the capital, Ross Kemp reported off the coast for Sky News, and Jeffrey Gettleman for the New York Times in Garoowe. Any casual observer of Somalia current affairs might think the place was pretty messed up, but a synch to report from. Wrong. Foreign journalists are kidnapped, but it’s the local journalists who are most at risk and who don’t have the relative comfort of an exit visa and a flight ticket to sanity.

Yet it’s they who continue to work day in day out. Even if nearly 30 journalists said it’s time to put the pens down earlier this week, they’ll soon be back on the streets. I really don’t have the words for how brave these journalists must be. Via Reuters journalist Barry Malone I discover the work of one of these incredibly brave folk working in impossible conditions, Abdi Sheikh, who today reports on the illegal arms trade,

Sitting on a mat at home between taking orders for arms on his two mobile phones, Osman Bare gives thanks for the riches flowing from Somalia’s war.

“I have only been in the weapon business five years, but I have erected three villas. I have also opened shops for my two wives,” said the 40-year-old, one of about 400 Somali men operating in Mogadishu’s main weapons market.

“Peace means bankruptcy for us.” link

Please follow his instructions on this blog post if you can help Frontline blogger David Axe raise the money to help Radio Shabelle journalist Hashi get out of Mogadishu.

Photograph by Mowlid Abdi for Reuters