The film, Ruthven told the Frontline Club, was not intended to be an exposé of the working conditions in Indian garment factories.

However the film still showed, with unfettered access, many exploitative practices of the Indian garment industry, including the unlawful detention of workers by the factory bosses and sweatshop conditions.

“I did feel it was quite exciting to have something that could potentially be used against these corporations,” said Ruthven. “But then it’s my sister’s job on the line.”

Ruthven followed the journey that many young rural women in India take to become a factory worker.

“Everywhere we went there were these recruiting organisations going into [rural] villages,” Ruthven said. As part of a government-funded initiative, private companies recruit and train mostly young women from impoverished rural parts of India and place them in jobs at garment factories. 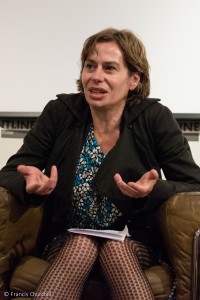 “There would be very, very quiet villages and suddenly you’d have three different Jeeps all with loudspeakers from different organisations trying to get the young people into the training centres, into the cities. And it’s all government funded,” she said.

Many of these companies do not make any money unless the women they train stay in their city factory job for at least six months.

Ruthven’s sister Orlanda was in the employment of one of these organisations, and one of Ruthven’s main concerns was that Orlanda, despite her good intentions, was complicit in the exploitation of the workers.

“If you are only accepting payment after six months then what are you doing to keep these girls in? If they’re unhappy what are you going to do about it?,” said Ruthven. “[Are you] going to lose your money? Of course not. They’re a small organisation that needs to keep it. So, you know, the whole thing was so dark.”

Coming to terms with her sister’s role in this industry was an important theme through both Ruthven’s film and her conversation with the Frontline Club audience.

“There’s such a cultural difference between what I was finding really difficult to see and badgering [Orlanda] about, which I did do quite a lot, and what she would get quite upset about,” she said.

The film explored the nuances of the industry that were apparent to Orlanda, but not obvious to Ruthven as an outsider. It would not be enough to simply film and expose evidence of the mistreatment. Instead Orlanda needed to think about the bigger picture, and that often meant taking things slow.

“I would say to Orlanda, ‘Well look we’ve got it, it’s bonded labour, let’s take it straight to the factory.’ And her line was ‘No, because I’d get booted out within seconds and nothing will change. So I need to find a way of sticking with this so I can shift things, I can get their freedoms […] If we can persuade this particular factory, that’s the second biggest factory in India and then we can work with other factories’.” 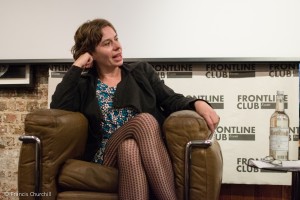 Patriarchy and culture played as much a part in the exploitation of female workers as the drive for profits. During one particular scene, Ruthven spoke to a security guard responsible for enforcing a curfew on the female factory workers. The guard explained his desire to protect the women from the real dangers of the city.

“When you hear the security man talking about [the women] as his daughters,” Ruthven said, “in one way part of me is horrified, and part of me quite loves him for it.” This patriarchy is a self-perpetuating problem that, in the film, Orlanda attempts to address.

Another grey area that Ruthven explores in her film is the potential for liberation that factory work can bring to rural women. “When you see two bright, really gorgeous girls like Bhanu and Bhutu [two of the films main protagonists], I wanted more than anything for them to get the hell out of the village,” said Ruthven.

“I found Bhutu’s mother really irritatingly oppressive… I just wanted [Bhutu] to have the same opportunities that young Indian boys would have.”

Ruthven was unsure as to whether the growth of the manufacturing sector in India will prove to be a liberating force for young rural women. “It’s an ongoing fight that [Orlanda] has with her bosses.”

However, Ruthven also wanted to bring the problem home with her film. “I only make work to show [in the UK]. I mean in a way I feel that my beef is with what we do, and with what I do.”

This form of exploitation does not just exist in the garment industry, Ruthven explained. “Every aspect of our life is like this, so either we’re throwing out the whole thing or we’re partaking in it,” she said. 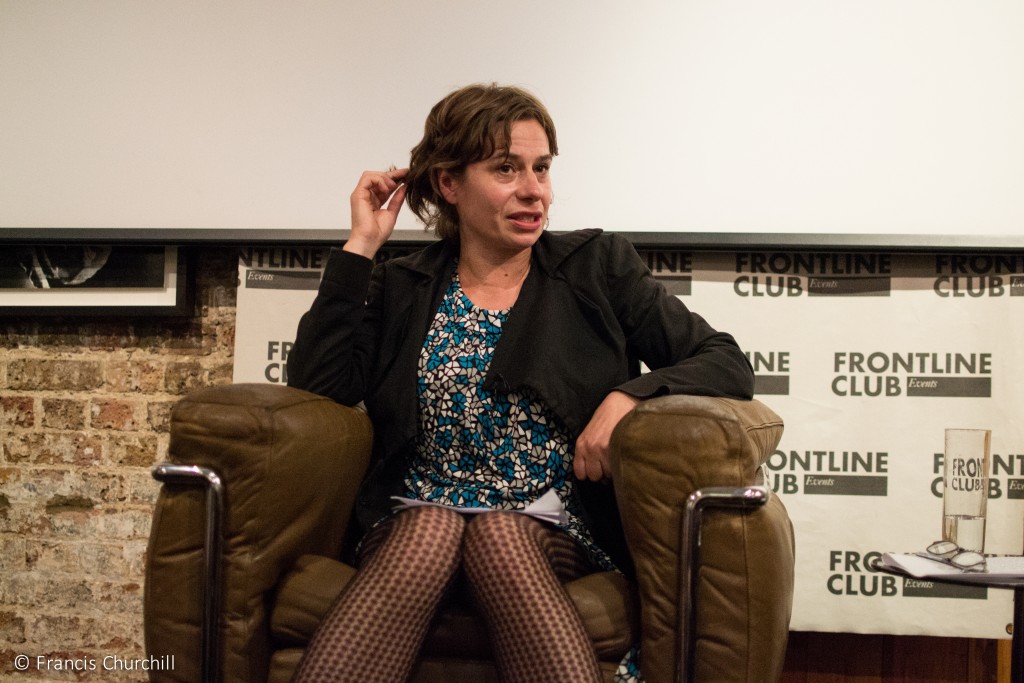