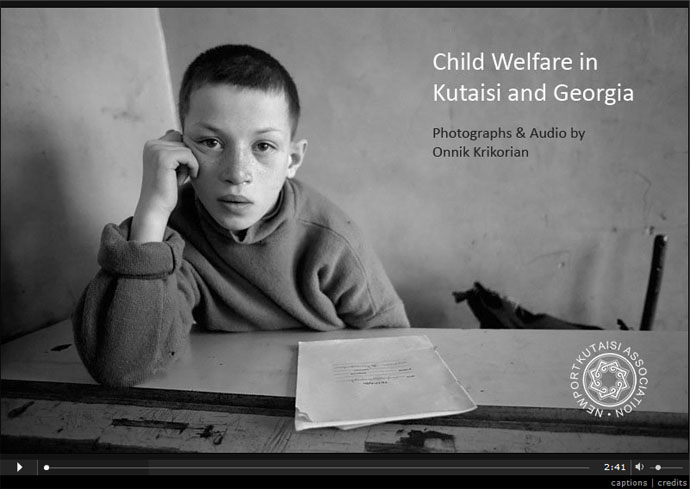 After undertaking some photographic work for the London-based Children’s Charity EveryChild in the Republic of Georgia in 2006, I visited the country’s second largest city of Kutaisi early the following year to further document social work and the reintegration of socially vulnerable children back into their biological families or with foster parents.

It’s been a long time in coming, and no doubt also frustrated by last year’s war with Russia over South Ossetia, but an exhibition of those images shot over seven days has started at various venues in Newport, the Welsh city twinned with Kutaisi. The exhibit is currently in the main foyer of the Newport Civic Centre and will be transferred to the city’s central library next week.

The photos will remain there until 27 March when they will then return to the Civic Center for exhibition in the Council Chamber in preparation for a visit to Newport by the British Ambassador to Georgia, Denis Keefe. The exhibition is being staged under the auspices of the Newport-Kutaisi Association who commissioned the work.

In this exhibition are some of the 900 photographs that were taken for us during the week of his stay. They depict the conditions that the Kutaisi social workers face daily and the children who we hope will benefit from the new Georgian reforms being put in place.

We are indebted to EveryChild, especially their country director, Andro Dadiani for all his help. Special thanks also goes to those in Kutaisi too who helped to make this happen, especially Anna & Khatuna and of course Onnik for working in poor lighting conditions and at great speed to produce a wonderful selection of photographs.

Anyway, if you don’t get to visit the exhibition in person, I posted updates about the visit on my old blog and also put together a brief audio slideshow of some of the photos on my main web site. The sound quality is a little dodgy, but you’ll get an idea of the problem of socially vulnerable children placed in dilipidated Soviet-era boarding schools.

Incidentally, articles and images concerning the same issue in Armenia can be found in the electronic versions of two books I designed, wrote and photographed. The first, Armenia: Poverty, Transition & Democracy, was intended to communicate issues of concern such as poverty, mental health, landmines and a series of falsified elections, while the second was for UNICEF.

On another related note, I started a project on the reintegration of disabled children late last year although I’ve not had much of a chance to continue it over the New Year period. However, I should be resuming work on that soon.