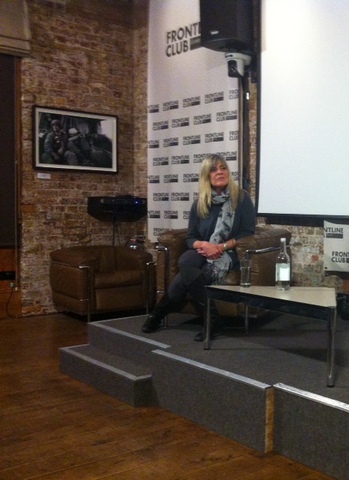 Camel racing is a sport for the wealthy and is a lucrative business throughout the UAE. Rich camel owners used to use trafficked young children as young as three for jockeys. Mainly from Pakistan, Sudan, Mauritania and Bangladesh they are used because of their light-weight to gain–an advantage in the races. The use of children has now been banned but the children have physical and mental scars, now feeling lost and displaced they struggle to grow as young adults.

Producer and writer Noemi Weis attended last night’s event at the Frontline Club to discuss how through secret filming they were able to expose this trafficking.

“Our vision really was to be very honest about what is happening, we are talking about children … this is a very isolated case, this is an extreme case where children are being used for the sake of a multimillion dollar sport”

The authorities remained very closed off when asked about the children used in the races and although it is now banned at the time of filming it was a difficult subject; much of the filming was done in secret. David Higgins, a photojournalist who helped film and was present at last nights screening explained the dangers.

“There was no one to trust, we couldn’t trust our drivers, so we didn’t brief our drivers, we would just tell them where we wanted to go on the day, we wouldn’t give them any warning. We couldn’t trust anyone in any of the embassies we dealt with because the amount of interrelation between business and political interest was so high”

“My feeling personally is that these children’s live’s are scared forever, and they were treated as a package, they were taken when they were two, and brought back as teenagers when they did not recognize [their] home, who their parents were …there is no future in the places they go back too”

It cannot be certain that children are no longer being used a jockeys in the UAE but Weis’s film has had a hugely positive effect. She plans to keep showing the film to prevent this happening again in the future.