Afghanistan: “A solution is going to look somewhat ugly” 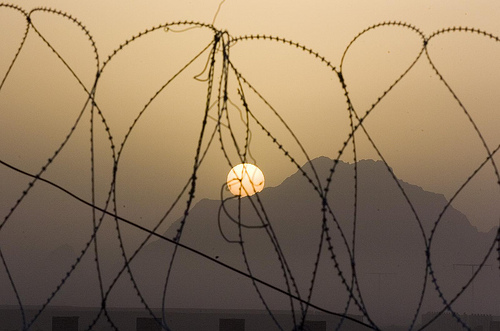 The important international voices have been ‘on message’ about Afghanistan recently in time for a new British-led NATO offensive in the area around Marjah in Helmand province.

At the London Conference last month there was talk of "turning the tide"; NATO Secretary General Anders Fogh Rasmussen believes there is new momentum in Afghanistan; and US General Stanley McChrystal says the situation, though serious, is no longer deteriorating.

A victory for the communications departments of the international players in Afghanistan, perhaps, but hard to reconcile with the thoughts of Alex Strick van Linschoten (a Frontline blogger) and Felix Kuehn.

Strick van Linschoten and Kuehn have been based in Kandahar full time for two years and have recently finished editing My Life with the Taliban. Last week, they came to speak to the War Studies Department at King’s College, London to offer their opinion on the situation in southern Afghanistan.

Kuehn and Strick van Linschoten may form their viewpoints from a particular place (although they also travel to other parts of the country), but unlike many other foreigners in southern Afghanistan they spend time talking with local Afghans without the backing of any military hardware.

Instead, they rely exclusively on their relationships with local elders to guarantee their security and so their testimony represents an important window on Afghanistan.

A theme that ran throughout their talk was the dislocation between the message of politicians and the experience of those on the ground. Strick van Linschoten, for example, estimated that only 15-20,000 people voted in last year’s election in Kandahar, not the 300,000 reported by election officials.

Similarly, Strick van Linschoten and Kuehn challenged the idea that the Taliban would be open to negotiating with foreign forces. (This recent Taliban statement appears to support their point of view.)

They also perceived the recent proposal to win over moderate Taliban with financial incentives as a move of "desperation and defeat" on the part of the international community.

According to Kuehn and Strick van Linschoten the security situation in Kandahar has deteriorated over the last 18 months. The Taliban are the key security players in the south. Highlighting the Taliban policy of assassinating government officials, Kuehn noted that "if they want you dead, they’ll kill you". Personal security, he said, relied on some sort of deal with a variety of tribal elders.

Kuehn said political progress in southern Afghanistan had ground to a halt. Strick van Linschoten cited a recent UN report which claimed that 61% of Afghans in the south experienced corruption in their everyday lives.

Shifting local political alliances, turf wars over lucrative contracts for reconstruction projects, competition in the narcotics industry, and the alienation of certain groups from jobs in central government all contributed to instability.

The precarious security situation means few Western journalists ever visit southern Afghanistan without the relative protection offered by a military embed. Kuehn and Strick van Linschoten noted that between fifteen and twenty journalists had come to Kandahar for the election last year, but only spent three to five days in the city. Otherwise, sightings of foreign journalists in Kandahar were rare with only around ten visiting outside of the election period.

Embedding also means that journalists’ interviews with local Afghans are usually undertaken while a foreign military unit is stationed near the interviewee’s house; hardly a setting that encourages honest disclosure.

I asked about the state of local media in Kandahar. Strick van Linschoten said small newspapers usually operate through funding provided by US and ISAF forces. In return the newspapers place a half page advertisement urging Afghans to join the National Army (ANA) or providing information about coalition forces. There are also a number of small radio stations.

While initially Strick van Linschoten and Kuehn regarded the development of local media in Afghanistan as a success story (the latter was involved in an IWPR project) they note that in recent times it has become increasingly difficult for journalists to operate. Self-censorship is a prerequisite for remaining alive while the Afghan government also places pressure on newspapers.

Perhaps most worringly Kuehn and Strick van Linschoten admitted they now had far fewer answers than when they arrived. In fact, they seemed to suggest the international community would probably be wise to ask some more questions.

We know very little of the detail about Afghanistan’s recent history, local Afghan politics can change significantly within the space of a few months and there was an interesting discussion triggered by a member of the audience about our lack of understanding of the views of Afghan women. (Though this site is a step forward in the latter regard).

But with President Obama placing a (possibly not so strict) July 2011 deadline for the withdrawal of US troops it seems that time may have already run out for the sort of questions that perhaps should have been asked long ago.

One "ray of hope" Kuehn and Strick van Linschoten discussed was the Pashtun culture of talking to enemies although this wouldn’t extend to occupying foreign forces and in short, Kuehn believed "any solution is going to look somewhat ugly".