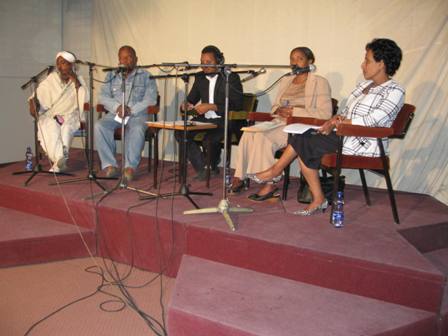 I’ve just returned from a great trip to Addis Ababa where I was working for BBC Media Action (formerly BBC World Service Trust) to support a team of six journalists from BBC and the national broadcaster Ethiopian Radio and TV Agency (ERTA) to make a 45 minute discussion programme.

The theme of the discussion was ‘can women be leaders in Ethiopia?’ – the fourth in a six part series on women’s issues. We were fortunate to get two female government ministers to take part, including Mme Shitaye who’s deputy government spokesperson. It’s safe to say there was some indignation when we played a vox from the streets in Addis where a couple of men said that women could not be leaders because they’re "emotional" and make "decisions too quickly".

In some ways, I would have liked the debate to be focused on a more tangible question, such as whether affirmative action is the right way to get more women into parliament; asking a question such as ‘can women be leaders’ is likely to just invite these kinds of views from men. However I was glad to see how easily these objections were overcome by the many strong women we had on the panel and in the audience. It even seemed to go some way to convincing the husbands of some of these women (who were also invited) that successful women in Ethiopia are not such a bad thing.

The main impression I had of the training was just how hard all the team worked, and how committed and enthusiastic they were. They told me that this sort of debate programme is really a new thing on the airwaves at ERTA and already it has been voted by the audience as one of their favourite programme. So Im looking forward to hearing more in the future..

Here’s a picture of the panel, with Mme Shitaye on the right, and BBC staff member Desalegn Asefa Melkammu chairing the debate: