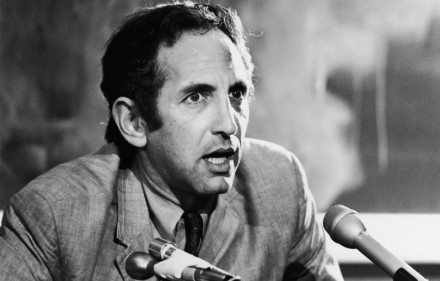 Daniel Ellsberg, publisher of ‘The Pentagon Papers,’ speaks at a press conference, 1970s.
Credit: Hulton Archive/Getty Images
This Saturday, the Frontline Club and New Statesman host a special adversarial debate, "this house believes whistleblowers make the world a safer place". Here we profile some of the most prominent whistleblowers in recent memory…

In 2004, a US military reservist named Joe Darby passed a CD containing shocking images to a member of the army’s criminal investigation command. The photographs on the disc were taken at Abu Ghraib prison in Baghdad, and depicted US soldiers torturing, humiliating and abusing Iraqi prisoners. The images caused an international uproar. In the weeks that followed, after an investigation, instances of rape and homicide were also uncovered at the prison, photographs of which have since been suppressed by the Obama administration. Eleven soldiers were eventually convicted of charges relating to the incidents at Abu Ghraib, and Darby was awarded a John F Kennedy Profile in Courage Award in 2005. But not all Americans have celebrated Darby’s actions. Some, including members of his own family, have branded him a traitor. He now lives in an undisclosed location and has started a new life out of the army.

While working as a US military analyst in the late 1960s, a 38-year-old Daniel Ellsberg made copies of classified documents relating to the Vietnam War. The Papers detailed America’s political and military involvement in Vietnam from 1945 to 1967 and demonstrated, in the words of Ellsberg, "unconstitutional behaviour by a succession of presidents, the violation of their oath and the violation of the oath of every one of their subordinates". Upon their publication in the New York Times in 1971, the Papers caused a sensation, exposing how four consecutive presidents – Truman, Eisenhower, Kennedy and Johnson – had knowingly lied to the public over the war. The reigning president at the time, Richard Nixon, tried to prosecute Ellsberg under the Espionage Act, but all charges were dismissed after it was revealed the prosecution had gathered evidence illegally through wiretaps and other means. Now aged 79, Ellsberg remains vocal in his support of other whistleblowers, and has been a staunch advocate of WikiLeaks.

When five men were arrested after breaking in to offices of the Democratic National Committee (DNC) at the Watergate Hotel in 1972, few expected the huge political scandal that would result. Known up until 2005 only as Deep Throat, then-Associate Director of the FBI, Mark Felt, leaked details of the Watergate investigation to Washington Post reporters Bob Woodward and Carl Bernstein. The investigation detailed how burglars who had broken in to the DNC’s offices had done so with the explicit prior knowledge of the White House, the Justice Department, the FBI and the CIA. Most controversially, tape recordings of conversations between President Nixon and his closest aides revealed that Nixon was himself directly involved in attempting to cover up links between his administration and the break-in, forcing his resignation. For 30 years Felt denied he was the source of leaks to Woodward and Bernstein, but came out shortly before his death in 2008 at the insistence of his family.

An ex-translator for the British intelligence agency Government Communications Headquarters (GCHQ), Katharine Gun was catapulted into the public eye after she leaked a top-secret email from the US National Security Agency (NSA) in 2003. The email detailed US plans to illegally bug the offices of six UN countries in the lead up to the Iraq War – contravening both the Vienna Conventions (the set of rules that govern global diplomacy) as well as the 1946 Convention on the Privileges and Immunities of the United Nations. Gun, aged 29 at the time of the leak, felt that the email was a direct attempt to undermine democratic process in the lead up to the war. It outlined how the US wanted British help in order to access "The whole gamut of information that could give US policymakers the edge in obtaining results favourable to US goals or to head off surprises." After the Observer splashed the contents of the email across its front page just two weeks prior to the Iraq invasion, Gun was arrested and charged under the Official Secrets Act. The prominence of the case won her high profile support from the likes of Pentagon Papers leaker Daniel Ellsberg and actor Sean Penn, and the charges were eventually dropped after the prosecution declined to offer evidence.