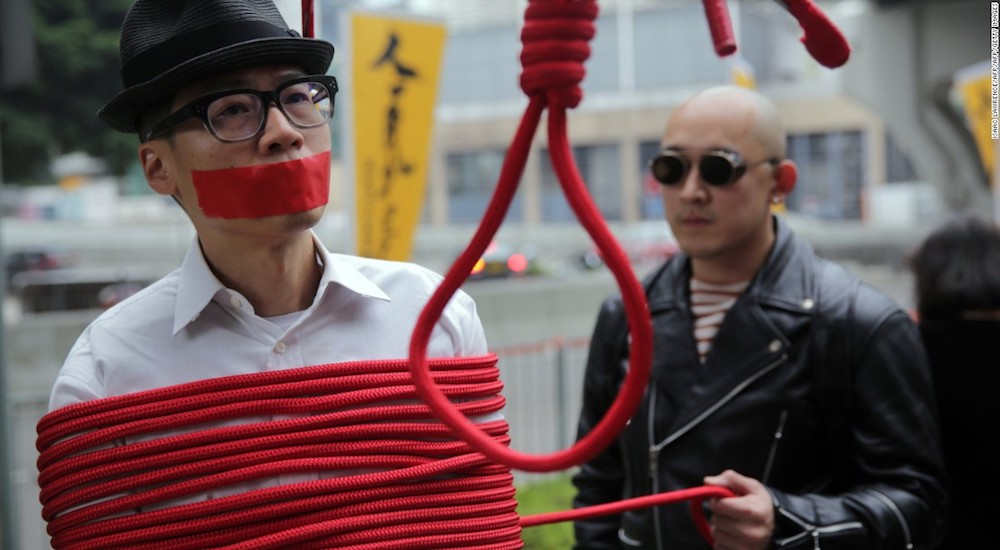 Disappearing Acts. Meet The Families at the Forefront of China’s Human Rights Violations.

Since President Xi Jin Ping came to power 4 years ago, hundreds of Chinese citizens have vanished on the orders of the Communist government, under the guise of anti-corruption leads. These are frequently followed by public confessions from high-profile figures. The Frontline Club, in partnership with Christian Solidarity Worldwide will be hosting Grace Gao, and Angela Gui as part of a panel discussion to share their personal experiences of the mysterious disappearances of both their activist fathers. Joining the discussion are journalists Isabel Hilton, and Ben Bland to explore the ongoing trend of disappearances, forced confessions, and widespread state surveillance both on China’s mainland and in Hong Kong.

Grace Gao is daughter to Gao Zhisheng – a prominent Chinese human rights lawyer who is best known for his work defending Christians, Falun Gong adherents, and other vulnerable social groups. As a result of his work on ‘sensitive’ cases and his open letters to Chinese political leaders, he was subject to numerous incidences of enforced disappearance and torture before being convicted of ‘inciting to subvert state power’. After three years in prison, he was released on 7 August 2014 with serious health problems, and has been under effective house arrest. Since mid August 2017, he has been missing again. Gao has authored a comprehensive report detailing human rights abuses and related social issues in China in the year 2016. This is the first comprehensive human rights commentary written by a human rights lawyer still living in China and his commentary covers a wide range of human rights abuses, including violations of the right to freedom of religion or belief, abuses in Tibet and Xinjiang and the situation of lawyers and human rights defenders. Grace has worked tirelessly, raising awareness of her father’s situation and wider human rights issues in China.

Angela Gui is the daughter of the Hong Kong bookseller Gui Minhai who is believed to have been abducted by Chinese agents in Thailand in late 2015. Gui was one of the five men who vanished in a spate of incidents known as the Causeway Bay Bookstore Disappearances.  It is believed he was targeted due to his work as a publisher specialising in books critical of the Chinese Communist Party.  Gui resurfaced months later in a detention centre in China, and was made to publicly confess to crimes on Chinese state television.  There has been no presentation of charges or conclusive evidence for his alleged crimes.  Angela is a PhD candidate at the University of Cambridge, and has been campaigning for her father’s release since he went missing. You can read her article in The Guardian here.

Isabel Hilton is a London-based international journalist and broadcaster. She studied at the Beijing Foreign Language and Culture University and at Fudan University in Shanghai before taking up a career in written and broadcast journalism, working for The Sunday Times, The Independent, The Guardian, and the New Yorker. In 1992 she became a presenter of the BBC’s flagship news program, “The World Tonight,” then BBC Radio Three’s cultural program “Night Waves.” She is a columnist for The Guardian and her work has appeared in the Financial Times, the New York Times, the Los Angeles Times, Granta, the New Statesman, El Pais, Index on Censorship, and many other publications. She is the author and co-auothor of several books and is founder and editor of chinadialogue.net, a non-profit, fully bilingual online publication based in London, Beijing, and Delhi that focuses on the environment and climate change.

Ben Bland is the South China correspondent for the Financial Times, currently working out of Hong Kong. Bland is the author of the recently published Generation HK – an exploration into the youth in Hong Kong, from activists, artists, writers and journalists, and the encroaching threat on their freedom of speech from the mainland. Bland has been a correspondent in Asia for almost a decade. Before Hong Kong he was based in both Indonesia and Vietnam.

Featured photo: A protestor is wrapped up with rope during a march calling for the release of missing booksellers in Hong Kong’s Mighty Current Publishing house, January 10, 2016.