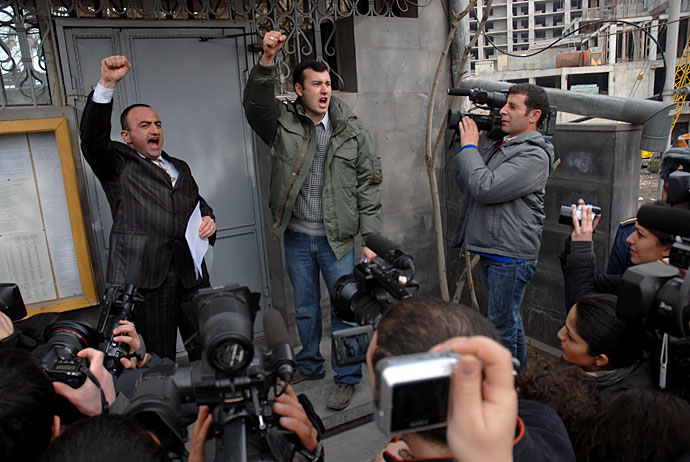 To be honest, I hadn’t particularly planned on attending today’s demonstration staged outside the Georgian Embassy in Yerevan to protest the detention of two ethnic Armenian activists in Georgia’s Samtskhe Javakheti region – or rather, I was in two minds about doing so. To begin with, a friend in town from Tbilisi told me on Saturday that the region could hardly be considered a hotbed of separatist nationalism seeking autonomy or unification with Armenia, a sentiment also shared by a foreign journalist based in the Georgian capital.
True, socio-economic conditions aren’t particularly good either, but that’s pretty much the case for most ethnic Georgian or Azerbaijani-populated regions in the country as well as pretty much anywhere outside the center of Yerevan, the Armenian capital. Nevertheless, after a phone call from one of those publicizing various other protests staged outside the Embassy informing me that the demonstration had been rescheduled for three hours later than originally planned, I jumped in a taxi and headed downtown.
Perhaps the main reason for going was to see how many people turned up. My taxi driver, for example, had heard about the protest on Radio Free Europe’s broadcast the day before and guessed why I was heading there. However, he seemed quite concerned that blockaded by Turkey and Azerbaijan, problems between Yerevan and Tbilisi would be the end of Armenia. With over 70 percent of the country’s trade going through Georgia, and still at war with Azerbaijan over the disputed territory of Nagorno Karabakh, he had a point. 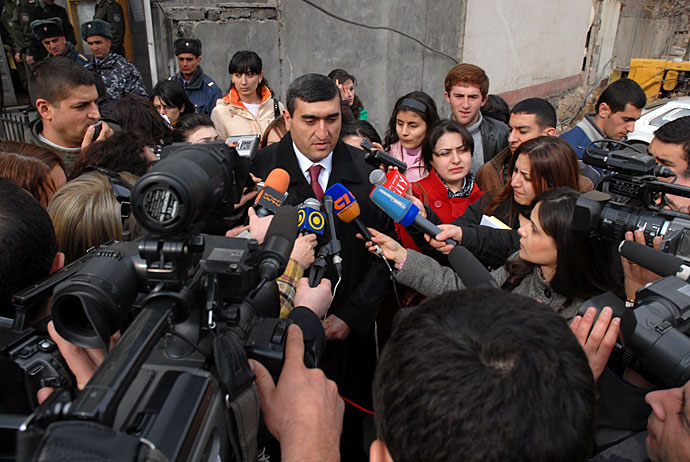 As it was, about 100 people turned up, a third of which were reporters — an unnaturally high level of media interest for a demonstration which could hardly attract more than 70 people mainly from Samtskhe-Javakheti, a region populated by a little over 100,000 ethnic Armenians (54 percent of its total population). What was also notable was that while some did hold up plackards of the two detained activists charged with espionage, most seemed more interested in screaming out "Javakhk," the Armenian name for the region.
Staging the demonstration in Yerevan also raises a few questions as to why it wasn’t held in Tbilisi. Some argue that it could be for internal political consumption a few days before the first anniversary of the 1 March post-election clashes in the Armenian capital during which 10 people died, or to whip up emotions among the population which would indirectly lead to the rejection of any normalization of ties with Turkey and a possible future settlement of the Karabakh conflict. It could also directly lead to increased support for Russia, already accused of stirring up trouble in Georgia. 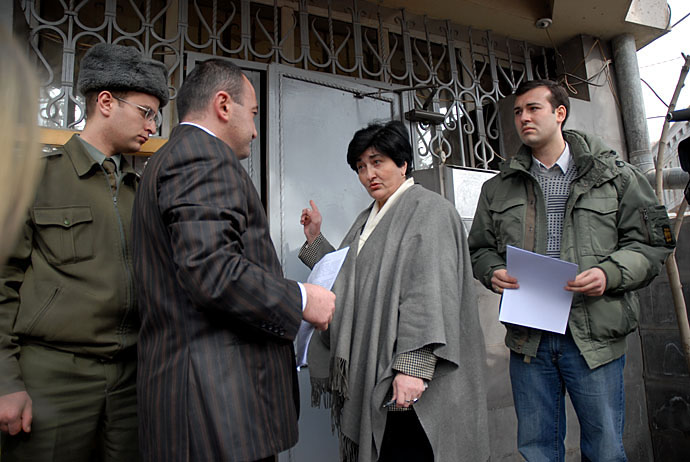 Regardless, the Ambassador, Revaz Gachechiladze, wasn’t at the Embassy because of a high profile visit by Georgian parliamentary speaker David Bakradze, but would be back in 20 minutes. The main organizers of the protest – local Republican Party MP Shirak Torosyan, President of the Javakhk Youth Union Artyush Grigoryan and Eduard Abrahamyan, head of a youth “analytical center” with strong nationalist overtones — declined to wait inside and instead gave interviews to the mob of tv crews and reporters covering an otherwise less than noteworthy demonstration. 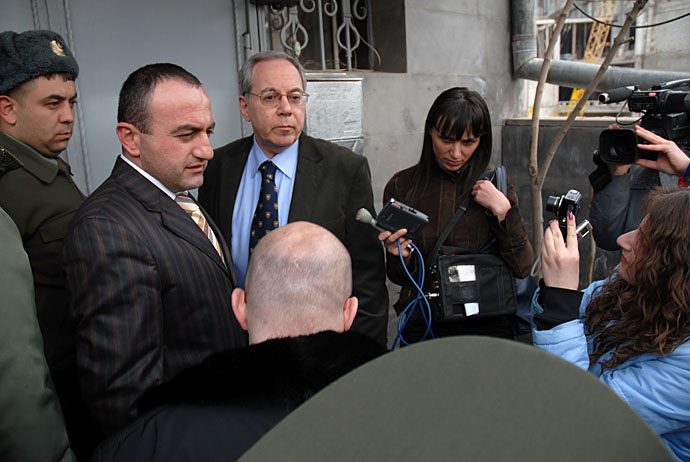 The police moved in to clear the way when Gachechiladze arrived and the protest organizers entered the Embassy to voice their demands, handing over a letter in Armenian which the Embassy promises to pass on to the authorities in Tbilisi once translated into Georgian. Typically for any demonstration in Armenia, they promised to fight until the end, but judging from the chants and the lack of any slogans calling for the release of the detained activists, it’s seems more likely that their main hope was to whip up anti-Georgian sentiments among the public.
But, while the rights of minorities in all three South Caucasus countries should always remain in the focus of international organizations charged with the task of supporting democratization and human rights protection in the region, it didn’t look as though they succeeded, although they did attract the attention of the local media who are not known for covering opposition rallies with such enthusiasm. Perhaps it was a slow news day…
Photos: Georgian Embassy protest, Yerevan, Republic of Armenia © Onnik Krikorian / Oneworld Multimedia 2009