David Hoffman: The war on photography 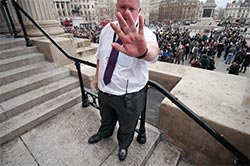 In case you missed last night’s first In the Picture strand, here is a brief recap. We also have the discussion available on video and to download on podcast here -, complete with his captivating pictures.

­­­One word we don’t often hear when talking photography: dirty. But that’s how Chris Steele-Perkins who moderated  the event introduced the everyday issues David Hoffman documents through his work. Police behaving badly, violence, riots and protests – the social issues that publications and media organisations are becoming too squeamish to publish.

David Hoffman looked back at his early career  in the 70s when commissions were relatively easy to get and pictures were sold for their true value.

While he commends the advancement of digital photography and what it has done for his profession, the Internet has disappointed him, he said.

Good work is drowned out by the mediocre as a photographer’s idea of quality has become less relevant. Digital distribution and super-libraries have disconnected royalty payments to the photographer, making it difficult for photographers to make a living.

David Hoffman referred to a ruling by a judge that a photograph of his has no copyrightof because it displayed people breaking the law as a demonstration of the financial difficulties journalists face, particularly those documenting social issues.

The audience – many of them photographers and journalists – asked numerous questions and had a lot of comments: Many believe good work still exists and the Internet can be the middleman – but how do you monitor the use of your pictures and draw in the money?

David Hoffman has campaigned against the use of police powers under Section 44 of the Terrorism Act to stop and search photographers without reasonable suspicion. A founder of the ‘I’m a photographer, not a terrorist‘ movement, David Hoffman and his colleagues have seen a fall in the numbers of photographers being arrested under this Act. Following last April’s G20 demonstrations in the City of London and the controversy over policing methods their presence has been scaled back at recent demonstrations and protests, he said.

Throughout his career David Hoffman has seen a change in the attitude towards photographers and journalists who cover protests: Since the Brixton riots of 1981, when press photographs were used to identify those involved, the idea that photographers are neutral has been eroded.

So have photographers’ lost the battle?

“We haven’t lost until we stop fighting,” David Hoffman said.