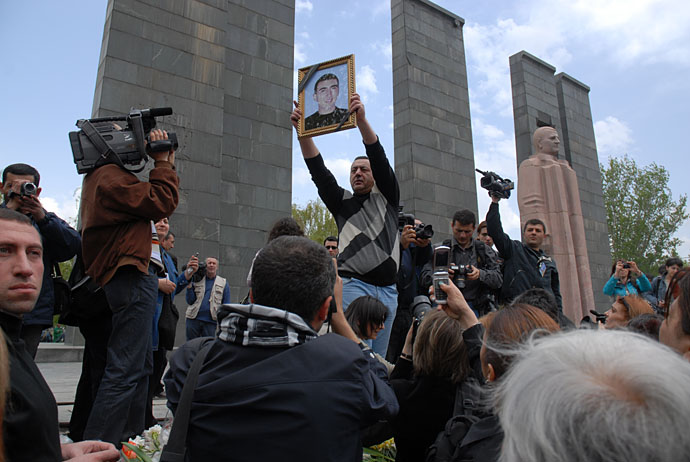 Having narrowly escaped sanctions from the Council of Europe, and following controversy surrounding the trial of seven senior opposition figures arrested after last year’s post-election violence, come two damning reports on the human rights and political situation in Armenia. Just 4 days before the first anniversary of the 1 March 2008 clashes which left at least 10 dead, Human Rights Watch released its report on the handling of the post-election violence which blames the authorities and police for the excessive and disproportionate use of force.

Police and protestors clashed in Armenia’s capital Yerevan on March 1, 2008, bringing to a head the country’s latest electoral dispute, over the results of a presidential poll in February. In the course of some 20 hours on March 1, in episodes at different city center locations, police variously set upon protestors without warning or resistance, negotiated, withdrew, returned to the offensive, and finally fought a pitched battle with a small group of protestors. At least ten people died-eight protestors and two police officers-and scores were injured.

[…] it is clear from multiple accounts that at various times police deployed excessive use of force, beating demonstrators who were not behaving aggressively, and some of the police use of firearms appears to have been indiscriminate or disproportionate. The fact that police were themselves under attack at times does not excuse those incidents where their own use of force was excessive. Neither does it excuse ill-treatment and torture of detained persons, nor the denial of due process rights such as access to lawyers of choice. link

And as if that wasn’t enough at a time when political tensions had significantly eased inside the country,  but risked escalating as the capital prepares for an unsanctioned opposition rally to be held to mark the anniversary this Sunday, the U.S. State Department issued its annual Human Rights Report. Again, the 19 February presidential election, the 1 March clashes, and the ensuing 20-day state of emergency feature prominently in it along with other outstanding issues of concern.

On March 1-2, authorities used force to disperse large crowds of demonstrators protesting the conduct and results of the election; clashes between protesters and security forces resulted in the deaths of 10 persons. Authorities imposed a 20-day state of emergency following the violence. […] Civilian authorities generally maintained effective control of the security forces, although some members of the security forces committed human rights abuses with impunity while under the direction of civilian leadership.

The government’s human rights record deteriorated significantly during the year, with authorities and their agents committing numerous human rights abuses, particularly in connection with the presidential elections and the government’s suppression of demonstrations that followed. Authorities denied citizens the right to change their government freely and citizens were subject to arrest, detention, and imprisonment for their political activities. Authorities used force, at times lethal, to disperse political demonstrations. Authorities used harassment and intrusive application of bureaucratic measures to intimidate and retaliate against government opponents. Police beat pretrial detainees and failed to provide due process in some cases. The National Security Service (NSS) and the national police force acted with impunity for alleged human rights abuses. Authorities engaged in arbitrary arrest and detention. link

Meanwhile, as Yerevan prepares for Sunday’s first major opposition rally to mark the anniversary, nobody is quite sure how things will play out. The police, however, have already stated that they will not tolerate any public disorder and it can be expected that the presence of security personal will be significant. Indeed, police say they will retain a presence until 7am on the morning of 2 March. I’ll post photos and an update on the evening of 1 March or, depending on what happens, the following day.

For now, diplomatic sources in Yerevan say they are not anticipating any trouble, but Embassies have warned their citizens in the country to stay away from locations where demonstrations and marches are due to take place. Incidentally, I’ll be twittering any significant developments as the day progresses, assuming the mobile phone network isn’t over-saturated. 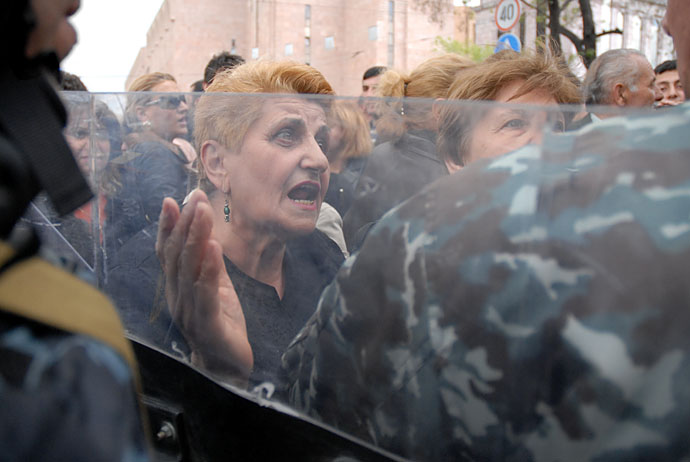 Photos: Remembering the victims of the 1 March post-election clashes 40 days later on the day of the presidential inauguration, Yerevan, Republic of Armenia © Onnik Krikorian / Oneworld Multimedia 2008