Cross of honour and debate

Four soldiers have received Germany’s new medal for bravery for their actions in Afghanistan – the first German military decorations awarded for bravery on the battlefield since WWII.

It’s known as the Ehrenkreuz der Bundeswehr für Tapferkeit or Cross of Honour for Bravery. 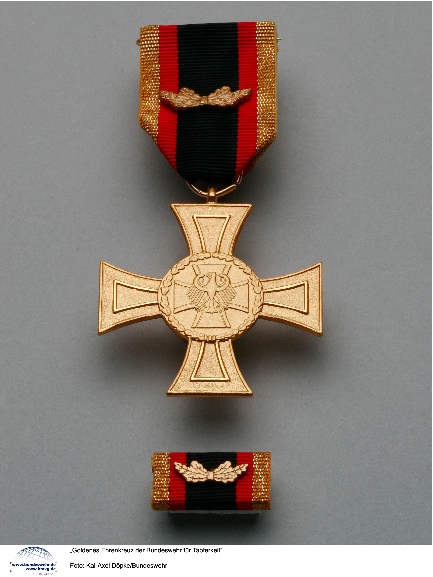 Yes it does bear a similar shape to the Iron Cross (Eisernes Kreuz) that was abandoned after WWII, but the design is in keeping with other Bundeswehr decorations for long service. View image

For Germany’s Association of Armed Forces a decoration recognising bravery is long overdue.

German Chancellor Angela Merkel also said, "Too little is said about the achievements, burdens and risks of soldiers."

Frau Merkel does have a point. But, while the German Government and military publicly backs their men and women in uniform, a fighting army that, even as peacekeepers, may have to be aggressive and kill an enemy, is still a major issue in German society.

Focus journalist and mil-blogger, Thomas Wiegold, also touches upon this point. The four soldiers awarded Ehrenkreuze put themselves at risk to save the lives of comrades and children injured following a suicide bomber attack in Kunduz last year. Clearly very brave deeds. But Wiegold wonders what debate might arise when German soldiers are nominated for decorations recognising valor on the battlefield. Actions involving killing the enemy. Doing what soldiers are trained to do.

It’s clear that even in northern Afghanistan German soldiers are doing more than say helping to dig wells, and at a cost.

Committing more troops to ISAF in Afghanistan, or deploying forces to regions where there is heavy fighting such as Helmand, has long been a political hot potato and even more so in an election year.

In contrast though, the military is very visible in Germany and a part of growing up for many males.

When I first moved to Germany in 2004 I was surprised to hear of conscription.

All German males over 18 are supposed to either elect for nine months of training and service in the Bundeswehr or the equivalent time doing Zivildienst – civillian service, such as working with the aged.

Catch a train on a Friday afternoon in Germany and you’ll see lots of young warriors in uniform heading to or from their training unit. Though, you could also easily be mistaken for thinking that white iPod earphones were part of their uniform.