Anne Applebaum, Pulitzer Prize winner and most recently author of Iron Curtain: The Crushing of Eastern Europe 1944-56 , who was chairing the event, said that it felt that on reading the book one of the most notable points was how teachers were inspired to be creative with their curriculums. Prokhorova responded:

“I expected to find it but I was amazed how many things have been created at that time [ . . . ] we always underestimate the creativity of our own society [. . . . ] Somehow started in this period the whole basis of new life was created.” 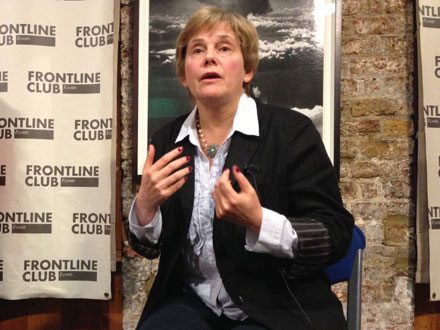 While Prokhorova‘s book charts the lives of both ordinary and elite Russians at the fall of communism through interviews and documents of the time, Bullough‘s book, The Last Man in Russia and the Struggle to Save a Dying Nation, follows the story of an Orthodox Priest named Father Dmitry who throughout the sixties tried to combat the alcoholism that was commonplace throughout Russia. Bullough said:

“He attempted, in a small way because he was one man and this is a very large country, to create an alternative community in which people could trust each other [ . . . ] His theory was – and I think he was right – that the nature of a totalitarian society is that it can only survive by breaking down the bonds of trust between individuals.” 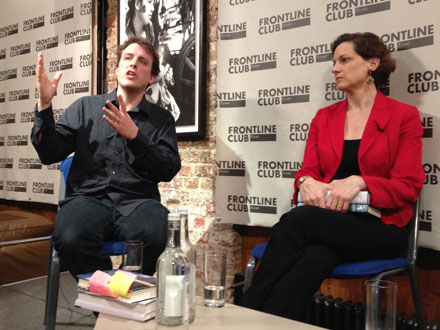 Bullough didn’t want to give away the end of the story and what eventually happens to Father Dmitry but he did say:

“So many of the dissidents, Marchenko or Sakharov…they are authentic heroes. Cast iron, 100% astonishingly brave, wonderful people and when you read about them it is inspirational. Father Dmitry is as it turns out not quite like that. In a totalitarian society heroes are a vanishing small minority; most people have to compromise. For whatever reasons, to get ahead, to get married or to get a job or to get a drink – to get anything. And once you compromise it’s difficult to stop. That is why I wanted to write about him.”

“They have to compromise to save their lives and their loved ones.”

In contrast to Prokhorova‘s optimistic view of society flourishing throughout 1990 and hopefully into the future, Bullough offered a different opinion:

“The protests against Putin are a sign of a growing society and people are beginning to trust each other in a way that they weren’t before [. . . . ] However, the damage that has been done by vodka is so awe-inspiring. The UN estimates that the population by the middle of the century will be 116 million – it’s currently 143million. That’s a drop of about the population of Canada.”

“Liberating yourself from the most horrific regime is a very painful process. You have to do quite a lot of things: psychologically, intellectually, practically. It’s very difficult to create this social fabric, I can assure you, for 20 years I’ve been trying to do it. The whole idea of survival was an individual thing [. . . . ] You have to teach people and you have to teach yourself too. We need a span of time.”

To which Bullough voiced his concern:

“There is a risk that people will become disillusioned and leave. This is something that the Soviet Union didn’t have – that it was very difficult to leave [. . . . ] The book does end in a relatively upbeat way. I’m encouraged that the new Soviet generation is much more socially active than I think I realised.”

Listen to Irina Prokhorova on how the Russian government should approach society in the future:

listen to ‘Irina Prokhorova on how the Russian government should approach society in the future (Frontline Club – April 19, 2013)’ on Audioboo