Concerns emerging over May municipal election 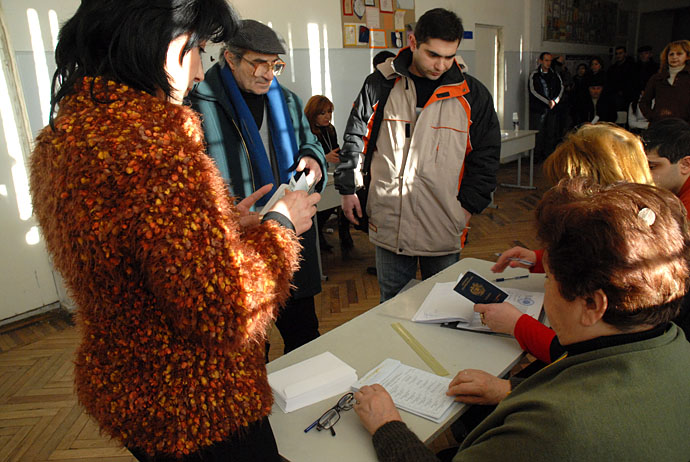 Residents of Yerevan will for the first time vote to elect a Mayor in May. Fearful that an elected Mayor would rival the power of the presidency, the municipal head had previously been officially appointed until the constitution was amended by a referendum held in November 2005. The 31 May election will also be the first democratic test for the authorities following last year’s disputed presidential election. However, some concerns are already being raised in international circles regarding legislation governing conduct of the vote.

Under a new law, Yerevan will be governed by a board of 65 party-affiliated alderman and the Mayor will be elected automatically if one party or polical bloc gathers more than 50 percent of the vote. Otherwise, the position will be determined by the board of newly-elected alderman. However, speaking to Frontline, the head of one international organization says that a provision in a new law on Local Self Governance in Yerevan could adversely affect the outcome. Others are more cynical and allege that the outcome of the vote has already been decided.

The controversy surrounds one provision of the new law which states that if a political party or bloc has more than 40 percent of the seats on the board of alderman but not the majority, they will be automatically allocated the extra seats necessary to appoint their nominee as Mayor. The clause was added to the bill in its second reading during a parliamentary session coinciding with the Christmas and New Year holidays. Only the parliamentary opposition Hertitage party criticized the move and few media outlets have so far picked up on the change.

Although such practices might seem less contentious in established democracies, Frontline was told by the specialist on democratic reform in the former Soviet Union that such a provision in a countries with a history of flawed elections was alarming and a form of "legitimized falsification." In the 2007 parliamentary election, for example, the ruling Republican Party received only 33 percent of the vote under the propertional system and most observers believe that it could not gain more than 50 percent in properly conducted local elections.

Therefore, Frontline was told, allocating additional seats on the board is a way to minimize but not prevent the need for significant fraud on election day itself. It was also likely to result in a Republican victory in May. Some are already speculating that notorious Kentron district head Gagik Beglarian — better known by his Chorni (Black) Gago nickname — would therefore take the position. Nevertheless, others contend that as the electorate has a track record of not showing interest in local or even parliamentary elections, believing that all power lies with the presidency, it probably doesn’t matter anyway.

What could change the situation, however, is if the opposition decides to seriously contest the vote.

Basically, the argument goes, as an elected Mayor of Yerevan would govern a city where nearly a third of the country’s population lives, the political and economic leverage the position represents is significant. In a country where even the parliament has no real political power, a popularly elected Mayor would represent a real threat to the presidency. It is for this reason, perhaps, that Heritage has already suggested that the party should form a bloc with the extra-parliamentary opposition Armenian National Congress (HAK) led by former president Levon Ter-Petrossian.

However, no decision has been taken yet and might be dependent on the turnout for the first anniversary of last year’s post election clashes to be marked in the capital tomorrow.