View in iTunes
You can watch the event here. 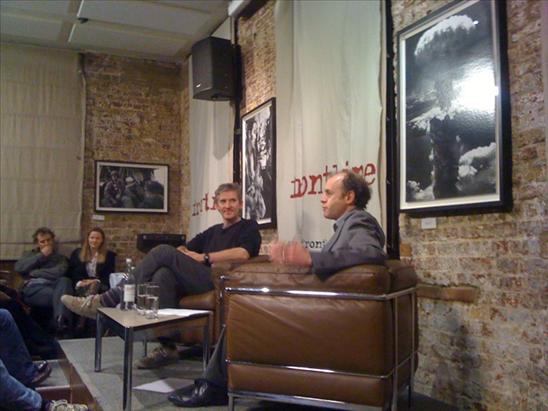 Journalists and human rights campaigners need to “expose the truth” behind the United States’ extra-judicial prison camps such as Guantanamo Bay and Bagram prison in Afghanistan.

That’s the call from leading human rights lawyer and founder of the Reprieve charity Clive Stafford Smith. He told a packed audience at a Frontline Club event to mark 12 months after Barack Obama’s inauguration: “The real issue is secrecy, not torture. That’s the legacy of the Bush era”

Listen to my interview with Stafford Smith and the host for the evening, BBC journalist Jon Menel, here…

Stafford Smith has represented several Guantanamo detainees, including Al Jazeera cameraman Sami al-Hajj, who was released in May. He’s been “taken in” by the secret police in Jordan, but says even this wasn’t as intimidating as being questioned at Guantanamo.

He cautioned that lawyers find it hard enough to get facts about how prisoners are held and treated – so it’s inevitable that journalists would miss out on stories. “It’s very hard to keep people’s attention – it’s hard for journalists to do a story and to keep them interested. but those are the stories that are the most important of all.

“It’s a symbiotic process with lawyers and journalists – we work together. Sometimes you Journalists can find out things we can’t…”

Obama pledged to shut Guantanamo just two days after taking office – but the President was forced to admit the timetable would not be met and 198 detainees still remain there without trial while 645 are being held at Bagram. “A lot of hard work has been done wondering how it will be closed,” said Stafford Smith.”But to this day there are people on Capitol Hill wondering where that plan [for closure] is going to come from.”

Stafford Smith was broadly supportive of Obama, despite his repitition of some of the Bush-era War On Terror langauge. “We have to remember the slate of problems he inherited. And they were bigger problems in some ways – you have to think about health and the economy… He has tried – it’s not entirely his fault. If I ran the US I’d screw it up worse than him.” Stafford Smith predicts Guantanamo to be shut down this year.

He highlighted the “bizarre” and “ironic” position of Guantanamo apologists, who argue that detainees are now so angry at the west and America that – regardless of any past crimes – they are now too dangerous to release.

So what should Obama do to solve the quagmire of Guantanamo? He should say sorry, according to Stafford Smith. The thorny issue of where to send the prisoners after release could be solved by simple diplomacy: “The Qataris would have taken all of them if the American’s hasn’t been so rude to them,” he said. “But the Americans won’t be kind to the Qataris because they talk to Hamas. It could still happen if we grow up and act like human beings.”