Climate change is about people not polar bears 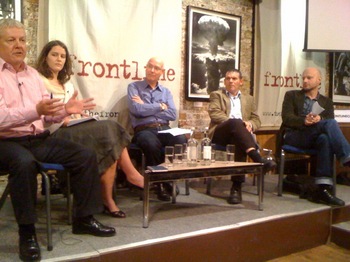 If Amnesty International is campaigning against it, that means climate change has become a global humanitarian issue.

Better known for supporting prisoners of conscience, Amnesty has recently begun to turn its attention to using human rights as a way to tackle environmental degradation and the resulting poverty.

Speaking at a Frontline Club panel debate titled “Should human rights be at the heart of climate change policy?“, Colm Ó Cuanacháin, senior director of campaigns at Amnesty, said:

Human rights and development have been increasingly integrated… it was inevitable that Amnesty would move in that direction using the rights for a safe and healthy environment.

Ó Cuanacháin explained that through targeting specific issues such as the rights to land and food, much bigger cases can be won. One example is the victory of Indian tribespeople over a bauxite mine proposed by Vedanta Resources – a campaign that was supported by Amnesty. He added:

Through the right to health we can talk about the bigger issues, such as the Canadian tar sands. Importantly, this shows that some of the richest countries in the world are suffering environmental degradation

The panel agreed that the current human rights framework, including national and international laws and the Millenium Develoment Goals, was substantial enough to fight environmental abuses. But Christoph Schwarte, staff lawyer at Foundation for International Environmental Law and Development (FIELD), asked:

Do we need a new framework [specifically] for climate refugees? Migration is probably the best adaptation as there can be. Maybe we should make agreements for the North to accommodate populations from South [of the globe] rather than new frameworks.

Marine Destrez, a researcher at Leadership for Environment and Development International (LEAD) was concerned that: “[In Malawi] you have a lot of dispositions in the law that could be used but no one knows about them.”

She described how LEAD teaches NGOs to distribute information that will empower people to fight discrimination, rather than lead to litigation. In the case of flooding, for example, there are many causes and pinpointing one perpetrator is impossible.

Lawrence McGinty, health and science editor at ITV News, spoke of his experiences travelling to places including China, Greenland and Brazil making the series “Three Degrees from Disaster”. Talking about the Mato Grosso people of  the Brazilian rainforest, he said:

He [a tribesman] said: ‘we have told you about farmers burning our villages,’ – which are important not just because of their livelihood, fishing, but also because they believe the spirits of their ancestors live in that fishing camp – ‘because of all of the incursions that are happening despite our protest, do you think we’re justified in killing people?’

Schwarte said he would like to see more exploration of international justice to further human rights:

I don’t think it’s easy to say one country is attacking another county or causing genocide. But taking one high-emmitting nation to the International Court of Justice at the Hague could unlock international negotiations, define principles.

Here is an audio interview with Schwarte on the potential of human rights and international justice for fighting climate change:

The comments on the #frontlineclub Twitter thread can be read below: