Britain’s ambassador to Kabul Mark Sedwill at the Frontline Club 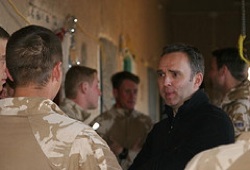 With the start of the London Conference on Afghanistan just days away we have an exciting last minute change to the schedule: Britain’s ambassador to Kabul Mark Sedwill will be at the Frontline Club on Tuesday 26 January.

This is a great opportunity to listen to the British Ambassador in Afghanistan and ask questions about the future of the country and what can be acheived at the international conference.

Mark Sedwill was appointed in April last year and is tipped to be the Nato Civilian Representative in Afghanistan. He has been reported saying that the conference would aim to set a tentative timetable to switch security duties from foreign troops to local forces and pledge funding for a program aimed at encouraging Taliban fighters to renounce violence and reconciliation with the Afghan government.

Mark Sedwill will be in conversation with Nick Fielding, a journalist who has written extensively about Afghanistan and author of two books: Defending the Realm: Inside MI5 and the War on Terror and Masterminds of Terror.

The discussion on Haiti will now be part of February’s First Wednesday event – details to be announced later this week.