When Arzu Geybullayeva and I first started to use blogs and social networking sites to connect a growing number of liberal, tolerant and progressive Armenians and Azerbaijanis despite the still unresolved conflict between the two countries over the disputed territory of Nagorno Karabakh, I don’t think we ever could have imagined where it would lead.

Not only did it result in a collaborative report on an ethnic Azeri village in Georgia in September, as well as further reporting in December, but we’ll also be co-presenting on this use of social media in conflict transformation in Tbilisi, Georgia, early next month.

The work so far has also caught the attention of some major media outlets, as well as international organizations and diplomatic missions, and this week came another in the form of BBC Azeri. For three days both of us wrote on the use of social media in the context of Armenian-Azerbaijani relations and I was also interviewed by phone.

The Internet has brought big changes to the lives of people starting from personal relations to business contacts. New media has opened up a new way not only for journalists. It has also inspired an audience and civil society towards free thought and social activism.

The wide use of social media has changed cultural and political values throughout the world. People are willing to communicate, participate and share their thoughts.

What opportunity does social media offer to peace activists from Armenia and Azerbaijan? Can new media tools change the current situation? What are the negative effects of social media in the light of nationalists using new media for an attack on the “enemy”?

Answers to these questions will be given by diarists writing on “Social media and conflict resolution” – Arzu Qeybullayeva from Azerbaijan and Onnik Krikorian from Armenia.

The material was published in Azerbaijani, but English versions are now available on Global Voices Online on the following links: 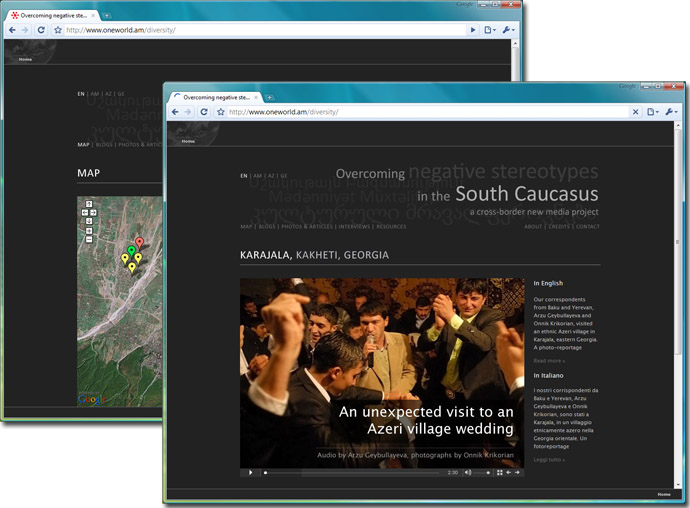 Incidentally, Arzu and I will also be doing some more collaborative reporting, including audio slideshows, on ethnic Armenian and Azerbaijani coexistence in Georgia while we’re there, so if you’re interested in any materials for publication please don’t hesitate to get in touch. In the meantime, check out the project so far at  http://oneworld.am/diversity/ , including a ground-breaking audio interview between Yerevan and Baku via Skype.