Art and Politics: The aesthetics of protest and the fight for human rights

Lesley McIntyre spoke first about her time spent photographing the RAF Greenham protest against nuclear weapons in the early eighties:

“What I saw at Greenham . . . it was a moment that was unprecedented, and an extraordinary ability to sustain a non-violent demonstration. . . . I always tried . . . to care about composition. . . . It was always trying to get an aesthetic image, a symbolic image that could be a metaphor for it.”

“What struck me this time [watching McIntyre’s film] the aesthetic comes first. . . . It’s the aesthetic that makes you understand that something extraordinary is going on. It implies that . . . art is not separate.”

The birth of McIntyre‘s daughter, Molly, led to her leaving the Greenham project but led to the start of a whole new chapter in her life: Molly’s life with disability and her fight to get her into mainstream school. McIntyre documented the entire time through her photographs which eventually formed the book The Time of Her Life.

On finding the aesthetics within her photographs, McIntyre said that it only revealed itself when she started to slowly print up the images years later:

“I was suddenly aware that what I had recorded was a life effectively, from birth until death. . . . The edit almost revealed itself. . . . It would have been very hard to write, to describe her physical presence. . . . Photographs reveal that. . . . I really wanted to address that particular aspect and how beautiful she was.”

Laila Sumpton is a poet, member of the Keats House Poetry Forum and also works with young campaigners at global children’s charity Plan UK, to help empower young people to speak about their own lives. After reading from In Protest: 150 Poems for Human Rights, Sumpton said that laughter is a key emotion to fighting with words:

“Laughter is an incredibly powerful tool . . . to confront human rights abuses, to stand up to terrible situations and spin them on their head – spin the power structures on their head as well. There are a lot of very harrowing poems in [the book] but there are also a lot of poems which stand up and say, ‘No, we’re going to show you how ridiculous you are by using humour.’”

"Laughter is a choice between survival and defeat" Laila Sumpton #lacunalive

Lacuna editor Andrew Williams and lecturer in law and creative writing at Warwick University said that after 20 years of working in legal terminology as a lawyer he became incensed by the constrained language and form he was forced to use.  He decided to take it out in creative writing, particularly his book A Very British Killing, which describes in minute and intense detail the case of Barha Mousa, who was beaten to death in the middle of a British military base in Iraq.

“The book is based on vigorous approach towards evidence . . . trying to look at more detail than you would possibly see in a court case, the detail that lies behind just the facts, the pettiness of the behaviour, which wasn’t overly abusive, just childish in it’s nature. . . . The aesthetic element of that is to try and break through the press reporting of it or the legal description in court, all very dry, all very mundane. . . . The aesthetic here is to try and get to a deeper truth.” 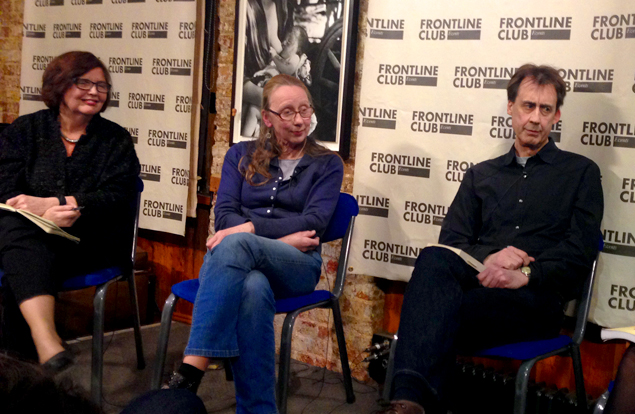 ice&fire artistic director Christine Bacon started out as an actor in Australia. In 2001, the then-Australian prime minister John Howard refused a boat of asylum seekers from Afghanistan and Iraq entry to the country forcing them to be detained on the small island nation of Nauru for four years. The Australian people subsequently voted Howard back into parliament.

“These events are shocking enough in themselves, the most shocking thing to me was that 85% of the Australian public agreed with the actions of the government. . . . That was my moment, of just saying, ‘What? Why do I think differently to everyone else?’”

Bacon attended a meeting addressing the situation and heard a woman speak who had survived for three days in the ocean after around 350 people drowned around her.

ice&fire performed a short extract from a new play that addresses the Sri Lankan civil war. Bacon said she was shocked to find out about what happened in Sri Lanka:

“It was shocking in terms of its subject matter, but again the shocking thing was, ‘Why don’t I know this? . . . Why is this not common knowledge? . . . Why is Sri Lanka not being held to account for this?’ That was really the impetuous for how do we find a way to make this as vivid as these stories were for people who really have no idea it really happened.”

An audience member asked, how do you stop these outputs from being purely aesthetic or on the reverse being swayed by government or NGO outlooks?

“Everything that we’ve done has been rooted in very detailed research and speaking to those people and making sure what is presented has an authenticity about it. . . . How can we authentically communicate something so complex difficult, full of all sorts of facets to people that are the lay-audience and make them understand this is something you should care about? . . . Because listen to that person. . . . It’s about this person, where they are and what they’ve been through, that’s why we should care. And that’s part of the power of art and expressive mediums.”

Watch or listen to the full discussion below: