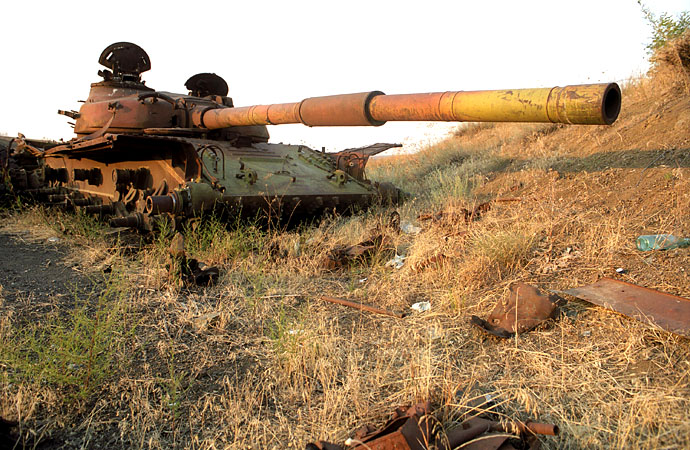 With the verdict still out on whether Armenia and Azerbaijan are any closer to negotiating a peace deal to end the long-running dispute over the mainly Armenian populated self-declared Republic of Nagorno Karabakh, most analysts and observers think that the 1994 ceasefire agreement will hold following the recent war between Russia and Georgia. However, while the probability of war breaking out has been reduced, and while the Armenian armed forces can still be considered the strongest in the region, Azerbaijan’s oil revenue has led to concerns that an arms race is now underway in the South Caucasus.
Despite quotas dictated by the Conventional Forces in Europe (CFE) treaty, Azerbaijan’s military expenditure far exceeds that of Armenia. Today, the local multi-lingual online publication Armenia Now reported that such concerns are very real indeed. Some analysts already consider that Azerbaijan is well prepared to play a waiting game akin to the Cold War hoping that Armenia will collapse and eventually agree to a peace deal on more concessionary terms than that on the table now. Others believe that a resumption of hostilities is inevitable unless CFE quotas are strictly enforced.
Azerbaijan, however, disagrees and says that quotas should instead be increased.

According to the data of Armenia’s Defense Ministry, Azerbaijan has 276 tanks and more than 1,000 armored troop-carriers (instead of allowed 220).

Still since the end of last year, Baku has stated about the need for revising the CFET quotas for Azerbaijan "considering the new geopolitical realities."

In his New Year address to the nation on December 31, 2007, Azeri President Ilham Aliyev promised to continue the modernization of armed forces and stated that the country’s military budget in 2008 will be no less than $1.2 billion. He repeatedly stated that "in the future Azerbaijan’s military budget will generally exceed the whole budget of Armenia."

At the Monday press conference in Yerevan, Minister Nalbandyan pointed out that the problem of Azerbaijan’s exceeding its CFET quotas requires a more serious approach and that "by increasing its defense spending Azerbaijan does not speak about peaceful intentions, but rather speaks about the possibility of war." link

In July 2007, such concerns were also raised in an article published by the London-based Institute for War & Peace Reporting (IWPR) while in recent weeks, the same publication has also raised concerns in Armenia that a demographic crisis creates additional problems for Armenia in comparison with its more populated and wealthy foe. The problem is even identified in the country’s National Security Strategy as well as its Mlitary Doctrine.

The government says that it needs to act now to tackle a lack of conscripts for the armed forces. Beginning from this year and over the next decade, conscripts will be young men born in the 1990s, the number of whom is constantly declining, as the year 1991, when the Soviet Union broke up and Armenia became independent, marked a fall in the birth-rate.

Meanwhile, the populations of both countries could surely benefit from an end to hostilities and money spent on the military diverted to other needs such as health and education. And as much of Armenia’s military budget is allocated to purchasing defensive weaponry, it  remains to be seen whether Azerbaijan will take note of lessons learned in Georgia which indicate that resolving ethnic conflicts by force is not only fraught with dangers, but is also unlikely to establish genuine peace and stability in the region.
15.2 km South of Lachin, Kashatagh Region (Armenian-controlled Republic of Azerbaijan), Republic of Nagorno Karabakh © Onnik Krikorian / Oneworld Multimedia 2006