Armenian opposition: Down, but not out? 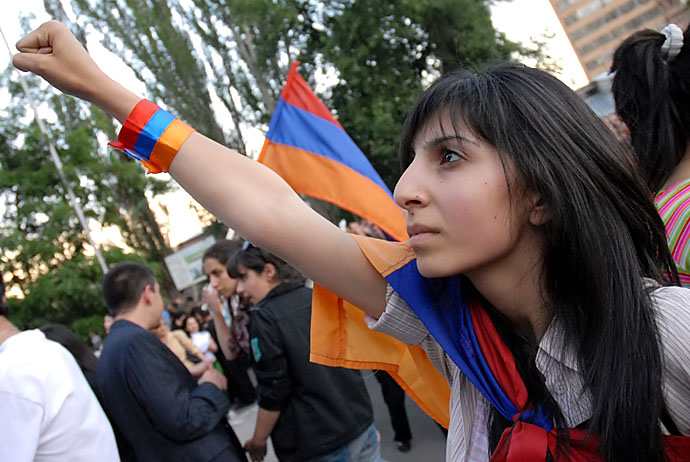 Roads into Yerevan were reportedly blocked yesterday ahead of the first opposition rally staged after Sunday’s muncipal election, the first to indirectly determine the mayor of the capital in 15 years. Even so, that shouldn’t have made much of a difference in terms of attendance figures in a city with a population of well over a million and with preliminary results showing the opposition Armenian National Congress (ANC) to have garnered 69, 871 votes in the disputed poll. Moreover, few should have been surprised.

Amidst reports of vote-buying, ballot box stuffing, and the busing of otherwise apathetic voters to polling stations as well as just plain old intimidation, the ruling Republican Party of Armenia cruised to victory with 190,171 votes. In what might be a world record for spending the least amount of time in a polling station, the Council of Europe’s small 15-person observation mission visited between 200-230 polling stations on election day in less than 12 hours and gave the vote a clean bill of health.

Hoping that the municipal election would become a second round of last year’s bitterly contested presidential election, it’s perhaps no wonder that one blog reported earlier in the day that some opposition supporters are becoming weary.

Was talking to some friends today. I would describe them as independent minded, moderate opposition supporters. While ridiculing the results of ‘election’ in Yerevan, they feel powerless re possibilities of changes in Armenia via elections, rallies. They said they won’t go today to opposition rally in Yerevan as “this is not the way things could change in Armenia”. They said they will follow the news via Radio Liberty instead. How sad…

Hopefully, this phase will pass, and these election games won’t completely break the hopes for better future in Armenia. link

Rejecting the results of the poll, the country’s first and former president called the vote the "ugliest in Armenia’s history." However, considering the conduct of past elections since 1995, that seems somewhat of an exagerration. Nevertheless, the ANC will not take up its 12 seats on the new municipal council and plans to instead rally its supporters on 12 June. Indicating that the opposition do not have the critical mass of support necessary to overturn the results, however, a demonstration reportedly planned for tomorrow has been cancelled.

Ter-Petrossian also made it clear that the opposition does not plan to launch a new campaign of street protests and civil disobedience. With temperatures set to rise this summer, the sometimes unbearable heat would make that impractical anyway. Yet, if spirits were down among many at yesterday’s rally, the ANC’s leader, Levon Ter-Petrossian, managed to turn the mood around for some as a few tweets, including those from ANC youth wing Hima!, indicated.