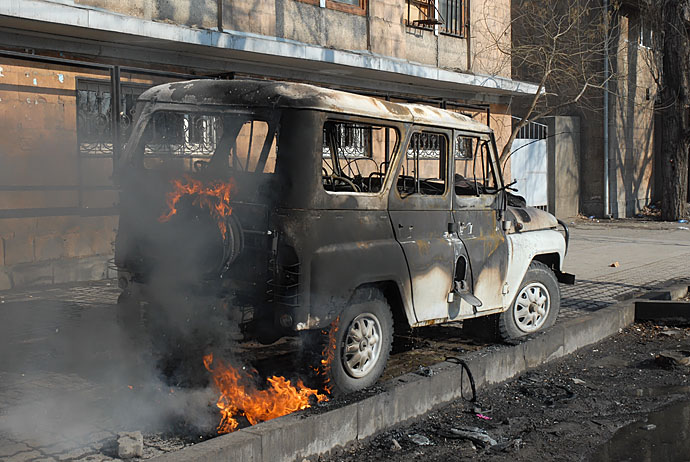 Armenia yesterday earned a brief reprieve from the Parliamentary Assembly of the Council of Europe (PACE) when a resolution to impose sanctions was voted down by a large margin following promises to make amendments to the Criminal Code. The two articles in question refer to attempts to "usurp state authority by force" and organize "mass disturbances," charges made against dozens of activists and leaders following clashes between the opposition and security forces in the immediate aftermath of last year’s controversial presidential election.

The running street battles resulted in the deaths of eight civilians and two policemen in what the authorities claim was an attempt to stage a coup d’état.  Dozens of vehicles were set alight on the streets of the capital and shops were looted. A PACE resolution had earlier called those opposition activists still In custody "political prisoners," but yesterday’s resolution significantly toned down such wording although still implied that some of those facing trial might have been arrested for "political" reasons.

Nevertheless, PACE welcomed a recent amnesty extended to 28 people arrested in connection with the 1 March clashes although the opposition led by former president Levon Ter-Petrossian dismissed the move. It did nonetheless cast doubts on the trial of seven of the most prominent members of Ter-Petrossian’s team, including his former foreign minister.  "We have not received evidence that they organized violent actions with premeditation with the aim to usurp the state power," the two rapporteurs, John Prescott and Georges Colombier, noted in a written statement.

Armenia has until April before compliance with previous resolutions will be discussed and considered again. However, although the PACE resolution identified progress in some areas, others remain contentious to say the least. Of most concern, perhaps, is the urgent need to ensure that the investigation into the bloody post-election clash is conducted correctly and considered credible by a population that will soon mark the first anniversary of the 1 March disturbances.

In the meantime, opposition and government supporters alike are unhappy with yesterday’s resolution, with the former accusing PACE of hypocrisy, and the latter decrying "external meddling" in Armenia’s internal affairs. Writing for Global Voices Online, I round up some of the commentary albeit mainly from pro-opposition activist blogs.