Armenia: An online revolution in the making? 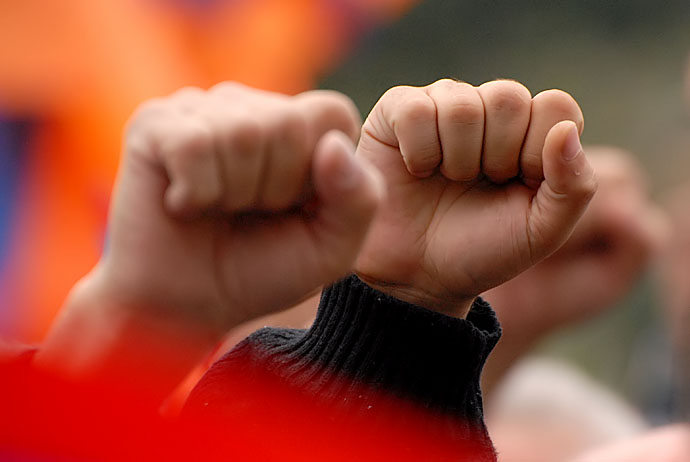 Recent events in Tunisia and Egypt have captured the attention of the world’s media and also encouraged and inspired other movements elsewhere, albeit in much bloodier ways as this week has shown in Bahrain and Libya. Not to be outdone, opposition groups in the South Caucasus are also looking to replicate similar events at home, and particularly in Armenia and Azerbaijan. But, while the continuing debate between the cyber-utopians and cyber-sceptics continues as to the precise role of social media in uprisings in the Arab world, opposition groups here most definitely believe it holds the key to succesful regime change.

In Armenia, blogs played an important role in the post-election standoff between the opposition and government in February 2008 and particularly for 20 days during the State of Emergency declared after clashes with security forces on 1 March 2008 left 10 people dead. Nothing changed, of course, with the newly elected president, Serge Sargsyan, still in power today, but many referred to new media as having become the new Samizdat, the Soviet-era practice of disseminating alternative information in an environment of significant censorship. Now, nearly three years later, the opposition says it believes an Egypt-style uprising will occur in Armenia, and social media will play an important role.

“It means that, first, ANC enjoys great support among Armenia’s population. Second, ANC is basically supported by educated people, who are familiar with internet and social networks technologies,” Zurabyan told a PanARMENIAN.Net reporter.

He added that “social networks provide with a great opportunity for overcoming the information blockade imposed by the authorities, specifically, through controlling the entire television.”

Many, however, are not so convinced with one local blogger pointing out that Zurabian himself does not apparently have an account. And although the Armenian government claims Internet penetration stands at nearly 50 percent, the real figure is more likely to be around 10-12 percent according to some IT specialists. One indication of that can already be seen simply by examining how popular some of the most accessed sites are. Facebook, for example, is second only to Google in Armenia according to Alexa, but there are only 132,000 registered users of the social networking site at present. Moreover, some analysts argue, it is unlikely that such a high level of support exists online and even more unlikely that it would take to the streets.

Though promoting the development of civil society in Armenia, Facebook cannot be turned into a tool for implementing a revolution in the country, according to information security expert.

As Samvel Martirosyan told a news conference in Yerevan, social networks helped to organised civil actions in Armenia, however only 1-1,5% of the users supporting the action online are ready to defend their position in real life.

In fact, while there are some opposition activists on Facebook, there are also government supporters and they too would become just as active, even if they are not at present, as one of the most well-known nationalist bloggers in Armenia recently remarked at a press conference in the capital, Yerevan.

Organization of a ‘Twitter revolution’ will not be an easy task, according to Tigran Kocharyan. Although major fundings for popularization of social networks like Twitter and Facebook in Armenia suggest the possibility of organizing opposition revolts, both Armenian authorities’ awareness of the methods of operating in social networks and anti-opposition Armenian blogger groups might prevent them, he believes.

But it’s more than just that, others believe. Although tens of thousands turned out for opposition rallies following the bitterly disputed presidential election in 2008, no critical mass was reached. Although there was deep resentment towards the authorities, the opposition failed to gain their trust especially as its leader was the first president of the country and considered by some to be just as corrupt and undemocratic when he was in power in the early to late 1990s as what exists today. In an opinion piece, the editor of one online publication also notes that Armenians are simply unable to lead or think for themselves.

[…] there is the answer to why such a revolt will not (even if some think it should) occur in Armenia.

Here, there is no “people power”. There are 10s of thousands – as proved in 2008 – who are willing to follow a leader, but none who are willing to lead themselves. There are no grass-roots movements here, where the soil of democratic will remains infertile even two decades after the toxic waste of communism should have been cleaned.

When a man, sadly and quite literally, sparked a social movement in Tunisia, his countrymen recognized themselves in his tortured desperation.

In Armenia, those who have valid grievance are waiting for an authority figure to voice it for them. That a populist, Tigran Karapetyan, with a message no deeper than bumper sticker slogans, could rally 6,000 or more followers – as many, in fact, as the major opposition bloc – indicates how low the bar has dropped on social movement in Armenia.

And, into any discussion of whether things in Armenia are getting better or worse under this leadership – and there’s some of each – arises the phrase that is on protest placards in Cairo: “illegitimate government”. Sadly for Armenia’s hopes of becoming democratic, this “illegitimate government” may very well be better than the alternative that would have emerged had elections three years ago been held fairly.

Lacking a movement that grew organically, Armenians at both political polarities were willing to follow dubious leaders in that ill-fated election.

Of course, with or without Egypt and Tunisia, the opposition would still have held mass rallies in the capital given that today marks the third anniversary of the disputed 2008 presidential vote and 1 March is traditionally the day to mark the bloody post-election clashes. But with, or most likely without, the use of social media combined with traditional means of public outreach, the opposition again failed to attract significant numbers onto the streets yesterday. Radio Free Europe might have estimated the number in attendance as being at least 10,000, but other media outlets such as Reuters and AFP did not, instead putting the number at half that.

YEREVAN – Around 5,000 opposition supporters rallied in the Armenian capital on Friday, calling for the government’s resignation and an Egyptian-style uprising in the former Soviet republic.

"The movement to change governments which started in Kyrgyzstan, Tunisia and Egypt is continuing, and sooner or later it will reach us because the situation in Armenia is no better and hatred of the authorities is no less," said opposition leader and former president Levon Ter-Petrosian.

But turnout at the rally was not large by local standards and did not suggest that political unrest was imminent.

Yet, despite low Internet penetration in the country, social media could have been used. However, there was no sign of any real activity on Facebook or Twitter. A Facebook support page for the opposition has just 915 members at time of writing and a group set up to invite Armenians to attend managed to attract 430 people while more than double that said they would not participate. Even today, following yesterday’s rally, Facebook remains quiet while Twitter doesn’t bring up much at all, with what little there is mainly coming from news sites in Azerbaijan, Armenia’s main foe in the region. And on YouTube, video coverage of the opposition rally in Yerevan from the main online opposition media outlet isn’t attracting much interest at all.

At time of writing, one video was viewed 1,411 times and a second 2,208 times. Naturally, there was at least a spike in traffic on the A1 Plus main site, but not by much.  With the population of Armenia put at around 3.2 million, A1 Plus received 21,467 visits across its entire site yesterday and 27 percent of that was from outside Armenia. Of course, Internet penetration remains low, but it’s more than simply that. Instead of the opposition telling everyone that they have huge support among the population, online and offline, they need to develop an outreach strategy instead. Certainly, if there is an Egypt-style uprising in Armenia, which most analysts doubt, social media doesn’t look as though it will play any significant role for now at least.

Instead, perhaps the opposition in Armenia should follow the example of activists in neighboring Azerbaijan who are very social media savvy in comparison. For now, though, any strategy seems to be simply setting up one or two Facebook pages and assuming that people will naturally be interested in sharing the information among their own peer-to-peer networks. Yesterday’s rally, however, showed that to be very far from the truth. But, with new Wikileaks cables released this week showing that there’s plenty of things wrong in the country, there’s certainly enough information to use in such a campaign. If only they knew how.