Well yes, I admit I may have used the cheapest of soap opera tactics to entice you to this second entry, and although it was hardly a cliff hanger, if you were expecting bullets ricocheting from walls as I ran for cover with a cacophony of explosions ringing in my ears . . . then relax. Nonetheless, it was a minor close call which elicited the concern of anyone who saw it and left more than a few brows with a bead of sweat or two. The incident took place not more than an hour after my arrival at Kabul International Airport (KAIA).

Usually – when I was working at EUPOL – I would have been met at KAIA by a close protection team, comprising two ex-military guys who would drive me off in the safety of an armoured vehicle. They were familiar faces and most were Brits with whom I was on first name terms. There was a certain routine to it all, the greetings, donning my body armour, a quick check as to whether I was still happy with the safety brief or a mandatory run through it if there was someone new. The chat that followed was nearly always the same, a catch up on anything that might have happened while I was away, any attacks or IEDs in Kabul, the current security situation and any lock downs or travel bans that were in place. Then, inevitably, we’d move onto compound gossip. To the Close Protection (CP) guys – who had all served at least two combat tours in either Iraq or Afghanistan as well as more demanding private security jobs elsewhere – the Kabul detail was something of a holiday and they frequently mocked that it was glorified taxi driving. However, the truth is they were friendly and professional and they instilled a sense of confidence that was much appreciated when you emerged from the airport a little dozy and jet lagged.

On this occasion, however, there was no CP waiting, instead I simply had to catch a taxi from the civilian to the military side of Kabul airport, which is not much more than a five minute ride. I quickly hooked up with another journalist who was also trying to make his way over to the military side and we took a “government taxi” from next to the police checkpoint at the gate into the airport proper. As it was Eid al Adha, the Muslim celebration at the end of the Hajj to Mecca, it was quiet and there wasn’t exactly a wide range of drivers to choose from but ours seemed friendly, if a little elderly. He clearly knew where we wanted to go and after some compulsory bartering we set off on the short journey.

As you approach the gate to the military side there is a slalom set up with concrete blocks that leads to a control light where vehicles are expected to stop and wait for the light to turn predictably from red to green. Beyond the slalom is the main check point, which is currently manned by Belgium soldiers who have a heavy machine gun trailed on the slalom to defend against Vehicle Borne Improvised Explosive Devises (VBIEDs) – essentially a suicide bomber in a car rigged with explosives.

On entering the slalom our driver slowed down, perhaps overdoing what caution might have required. As we dawdled towards the red light all seemed well and a few metres ahead of it I turned to the driver expecting him to pull up but as he continued to creep forward it become apparent that he might not understand the system or that he was so blind he couldn’t see the light. Both myself and the other journalist started telling him to stop – as best as we could that is with gestures and somewhat alarmed expressions – but he just slowed down a notch and continued crawling forward. The closer we got, the more adamant our requests to halt became until we heard a shot ahead of us and I turned to see a puff of smoke rising from a barrel pointing towards us but overhead . . . .

Now that the driver still hadn’t stopped and the red light was drawing in line with the back passenger seat I could only assume he must be deaf as well as blind and by this time I was close to begging him from the front passenger seat, hands outstretched waving desperately up and down with splayed fingers. He turned to me with peaked eye brows and the corners of his lips pursed in a plaintive pleading expression, which said some combination of the following: “What have I done wrong?” – “I’m trying to help” – “I don’t know what to do” and “I’m not sure what’s going on”.

To our great relief at this point he stopped, I think mostly out of shear confusion. We explained that he should reverse out and we navigated to a safe distance clear of the slalom. To some extent though, this was only the beginning of it.

The other journalist approached the checkpoint by foot and negotiated a second run for us which pulled off smoothly except that we had to give statements to the MPs to account for the fired flare. Now I won’t go into details from this point onwards but in the confusion that ensued we were admitted into the base in an unescorted taxi and drove right the way up to the central HQ building, managing to inadvertently breach security. The officer who we met was dumfounded that we had made it inside with a taxi and regarding our close call, he remark “you’re damn lucky they didn’t open up on you” and then as if to reassure us “but don’t worry they would have fired at the bonnet” which didn’t strike me as a wide margin of safety. Another guy who saw it, an Afghan who worked in one of the Kitchens and was waiting at the gate as the shot was fired, came over to us exclaiming how lucky we had been and then to top it off, one of the junior officers in the Public Affairs Office commented that he reckoned we’d “already used our luck up”.

For the rest of the day I worried about our poor taxi driver and pictured him driving alone on his way out at two miles an hour into a line of bright red lights and guns, completely oblivious to what he was doing. Fortunately there were no other incidents that day and if he was stopped on the way out, the officers that we spoke to were aware that he was on his way and that it wasn’t his fault, so I can only assume he made it out safely, probably sometime just before sunset as he rumbled along at a snail’s pace.

All joking aside, there were some serious lessons to be learnt, mastering a few words of Dari, for instance “stop”, might come in handy even for the most trivial of journeys/tasks. I have the British Army Dari/Pashtu Phrase Booklet somewhere, which definitely includes “stop” and if I recall correctly also has the useful phrases “don’t shoot” and “where is the toilet?”

This took place over a week ago, since when I’ve been at Command Out Post (COP) Garcia in Eastern Nangahar Province and have been out on my first embed proper in what is one of the safer areas of Afghanistan. There will be more to follow on this soon but I’m juggling entries with spending time “behind the wire” and trying to find adequate computer access. I hope to start providing a little more substance, not just personal anecdotes, although I’m sure there will be more of those too.

Meanwhile, in Kabul, official election results have been announced for the Parliamentary Elections to the Wolesi Jirga. As with the Presidential elections of last year, the process has been mired by irregularities with votes from an entire province – Ghazni – having been withheld. Again, I’ll have more to say about this later.

The picture below was taken in a Huey helicopter as the light was breaking from the clouds not far from the Khyber Pass, which was one of the stops on the regular chopper shuttle services between the military bases here. 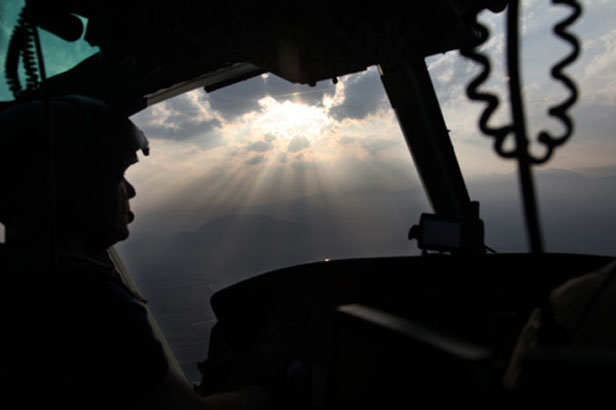