All hands on deck: Yerevan sails into election week 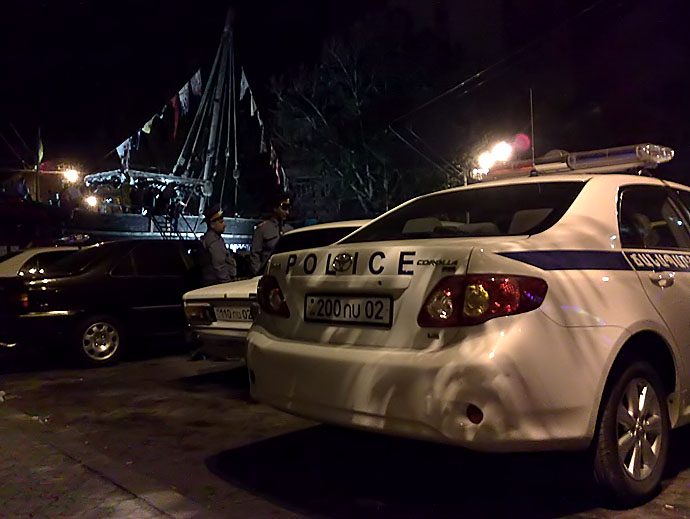 If British folk-rock legends Jethro Tull materializing in the country last week — with the Armenian prime minister going hell for leather in his return from Kazakhstan so he could catch his favourite band perform live in Yerevan — was bizarre enough, then nothing could prepare anyone for the latest surreal development in post Soviet Armenia. Faced with a crucial municipal election in the capital this weekend, how on earth do you find a reason to block off access to the main venue for the opposition to hold rallies?

Actually, it’s quite simple really. In the past the government would suddenly hold children’s concerts in the same venue although after last year’s bitterly contested and controversial  presidential election they tried a different approach, deciding to instead build an underground car park in Yerevan’s Liberty Square to keep it off-limits to everyone until Autumn 2010. But now the opposition are holding rallies at the manuscript museum in Yerevan, what do you do then?

Well, bear with me here for a while. It does make sense, really. Centuries ago, Armenia stretched from sea to sea, and a few years ago a replica of a 13th century Armenian ship was constructed in this now land-locked country to sail across the globe and no doubt stimulate a thousand and one wet dreams among nationalists the world over. Conveniently, the ship is also wide enough to block entrance to the latest venue used by the opposition to stage their rallies. Of course, that’s probably just coincidence.

Nevertheless,  A1 Plus reports that the Cilicia ship was tonight used as a stage at the said location for a concert "dedicated to its first navigation," although cynics might suspect that it was a last minute thought just three days before the next planned opposition rally. Yes, we know the municipal election is crucial and yes, we even know that there already concerns being expressed. Yes, even paper ballot boxes and the sudden asphalting of backyards is understandable albeit reason for concern, but this?  There were barely 100 people in attendance.

The unexpected appearance of "Kilikia" sailer near the Matenadaran has created a stir in Yerevan City.

The ship has been kept in the territory of a Yerevan salt mine for three years. […] link

Still, despite the fact that the ship has been out of sight and mind for so long, the pro-opposition media reports that the muncipality promises it will be removed in time for the next rally by the former president and extra-parliamentary opposition leader, Levon Ter-Petrossian, but  let’s see. Until then, there’s nothing more to say on the matter apart from to post the initial tweet that pushed me to run down with my Nokia N82 to see if the absurd had actually occured as well as a few reactions.